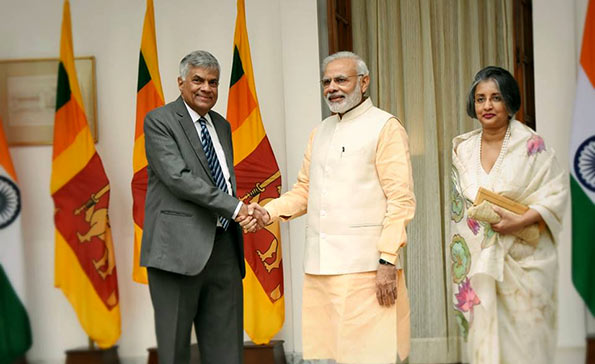 Sri Lanka’s Prime Minister Ranil Wickremesinghe has always been a friend of India even at a time when most Sinhala political leaders disliked New Delhi for its support of the Liberation Tigers of Tamil Eelam. Ahead of his visit to India, Sri Lanka too pulled out of the Islamabad Saarc Summit and sent a reassuring message of support to the Narendra Modi government.

“There is no future for Saarc unless cross-border terrorism is brought to the table for discussion,” Wickremesinghe said at a news conference on Wednesday in Delhi. He explained that the issue of cross-border terrorism is of concern to many members of Saarc and has to be dealt with if the group wants to remain relevant. He said a decision on this vital issue has to be taken soon.

There have been murmurs in Sri Lanka about it pulling out of Saarc. The opposition have said it was because of New Delhi’s insistence that Colombo fell in line. The opposition has slammed the decision as a “foreign policy blunder.”

Udaya Gammanpila, a staunch supporter of former president Rajapaksa, said the decision was a snub to Pakistan, a “friend” of Sri Lanka. “Sri Lanka was aware of Pakistan’s decision to postpone the summit. Still, they went ahead to announce that Sri Lanka was not taking part,” Gammanpila, said. “It is a fatal mistake to take the side of India and boycott Saarc by hurting Pakistan”, he added. Colombo’s ties with Pakistan have always been good. In fact, during the army campaign against the LTTE, it was Pakistan which provided Si Lanka with military hardware whenever it wanted. Though New Delhi supported Rajapaksa’s war against the Tigers, it did not provide any lethal arms to Colombo because of domestic considerations.

Some section of the Lankan bureaucracy is unhappy over what is being seen as Delhi’s arm twisting. “We are a sovereign nation, however, small we may be, and have a right to come to take our own decisions,” an official, contacted by phone in Colombo said. He naturally did not wish to be identified. “We have faced terror and know its consequences, but that does not mean we have to be hustled into making announcements.” Many are angry with the Sirisena-Wickremansinhe duo for bending to India’s diktats.

Prime Minister Wickremesinghe, who flew into Delhi from New Zealand, had said in a speech there that Saarc had a bleak future and Colombo would have to look for other “viable options”. “This year’s Saarc Summit is in jeopardy due to the war prevailing on the border. However, as Saarc plays an important role, carrying out the Summit is a matter of great importance,” he is quoted by agencies as having said in his address.

At a news conference in Delhi on Wednesday, the visiting Prime Minister made the same point: “Cross-border terrorism is a big issue (in Saarc) and we have to discuss how to tackle it.”

During the 1985 Saarc Summit, Colombo had suggested that countering terrorism should be taken up as an issue by member states, but this was shot down. As a friend of India, Wickremasinghe said perhaps the time was not ripe for that idea in 1985. India had supported the LTTE fight for Tamil rights and did not agree to dub the LTTE as a terror group. Colombo had then accused India of harbouring terrorists.

It is a fact that smaller Saarc countries had always been held hostage to India and Pakistan relations. When Chandrika Kumaratunga was President, she had spoken out against this and suggested that Saarc should play a role in solving problems arising between member states of the group. This was naturally shot down by India, saying that Saarc was an economic group. Saarc’s failure as an organisation has much to do with India-Pakistan hostility. Both countries would block moves made by the other.

Answering a question on India-Pakistan, Wickremesinghe said, “Don’t think war (India-Pak) is an option, your PM (Narendra Modi) has taken a lot of steps to defuse tensions.” He went on to add that Modi must be complimented for showing “the restraint he has shown.”

He was asked about Colombo’s ties with China. Mahinda Rajapakse had been a close friend of China and signed a $1.4 billion deal to allow the Chinese to build a brand new port city in Colombo. The project was kept on hold by the new government for environmental concerns. But earlier this year the project was cleared. Colombo is hoping to build a manufacturing and trade hub in the port town. Sri Lanka also has plans to turn the port of Hambantota into another Shenzhen — the city that was at the heart of former Chinese leader Deng Xiaoping’s reforms. Wickremesinghe said that Sri Lanka’s relations with China were “economic and not military.”

The Prime Minister said that while Colombo had these two major projects with China, its economic ties with India was much more.

“With India, we are doing a lot more… infrastructure projects, road projects, military co operation…. China has no military presence in projects such as Hambantota (the port built by China). But with India, we have strategic and military ties”