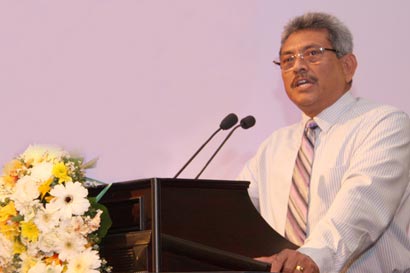 He said the government did not decommission war heroes attached to the CSD following the war, but made use of their contribution in the country’s development efforts.

The Defence Secretary was addressing a ceremony to handover the keys of 102 new house to war heroes of CSD and exercise books worth Rs 12 million to over 24500 schoolchildren of CSD members held at the BMICH .

“Everybody thought that the government would decommission the CSD following the victory of the war. But we did not do so,” he said.

He said they took measures to deploy them in productive projects and cultivation ventures across the country to obtain their contribution for the development process of the country. On the other hand, we further strengthened the CSD by recruiting more rehabilitated ex LTTE members,” he said.

“Our security forces are well trained and disciplined. Therefore, on the instructions of President Mahinda Rajapkasa, they have been deployed in many development activities that allows them to earn additional income without placing any burdens on the Treasury, he further said. The Defence secretary said cadre strength of the CSD had been increased to 41,500 and Army trained them properly. Sophisticated arms were given to them instead of shot guns that they had been familiar with.” We have no idea of decommissioning CSD personnel who protected threatened villages during the war. Today, they have been deployed in many development, construction, cultural and religious projects in their villages as well as the country itself”.

He further said that everybody used to say that the answer to the terrorist problem could not be found through the militarily means. But the people elected President Mahinda Rajapaksa to win the war and he did it within the two and half years to see the end of 30 year war.

Improving the welfare of the post conflict security forces has become a top priority of the government. “ I appreciated the efforts of the Seva Vanitha Unit of the CSD for constructing 102 new houses for their members despite many difficulties.

Even after the war has ended, the SVU of the CSD rendered yeomen service by becoming the helping hand to the war heroes and their families, in their new role in the post war era. Though the CSD SVU does not receive much attention or donations from the public due to the short period of its existence, it never rejected any request from CSD persons or their members.

CSD Director General Rear Admiral Ananda Peiris said that CSD personnel who earlier made maximum contribution to eliminate terrorism is transforming itself as a battalion shouldering the task of developing Sri Lanka and cultivation ventures in the country.

The CSD which was first known as the Home Guard Service providing security to villages was restructured under the purview of the Defence Ministry, providing all facilities. Not only uniforms, boots, but also due social recognition has been granted after the CSD was established. As they did earlier during the conflict by adding their strength to achieve victory, they would do same in the country’s agriculture, construction, cultural religious sectors .

He said paying tribute to CSD personnel, President Mahinda Rajapaksa pledged a pension for members of the Civil Security Force who contributed to the humanitarian operation that liberated the country from terrorism. CSD has earned an income of Rs. 342 million so far from its agricultural, fisheries and brick manufacturing ventures. The CSD members who held firearms in their hands with a view to protecting their villages during the war, were now seen with mammoties and machetes, toiling away to cultivate lands. Over 10,000 acres, have been cultivated with various crops , covering all CSD forces headquarters throughout the country.