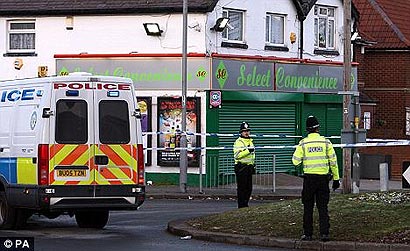 The teenage daughter of a Sri Lankan shopkeeper stabbed to death during a suspected robbery, watched in horror as the attack was shown on CCTV in the family’s flat upstairs in Birmingham, UK Saturday night.

She saw attackers armed with a knife try to grab cash from the till, and called the police.

Another shop worker suffered head injuries and is recovering in hospital.

The victim was Suppiah Tharmaseelan who ran the convenience store in Kingstanding, Birmingham.

He and his 34-year-old wife Sangeetha had lived above the shop with their two sons and daughter, who is thought to be 15, for about a year. The family are originally from Sri Lanka. Officers were called to the shop, also known as Haresh’s Superstore, at 9.50 pm on Saturday.

West Midlands police said Tharmaseelan had been found with stab wounds and was pronounced dead at the scene.

A spokesman said four men were seen running from the shop following the stabbing.

The spokesman added: “At this stage the motive for the attack seems to be a robbery.”

Witnesses said that two people were captured on a nearby shop’s CCTV running from the store and into a waiting car.

A man and a woman, both in their twenties, from the Sutton Coldfield area, have been arrested on suspicion of murder.