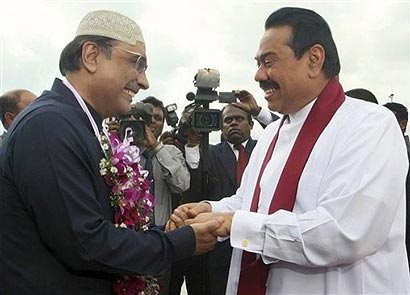 COLOMBO, Nov 29 (APP): Pakistan on Monday offered specialized training, closer collaboration and sharing of expertise in counter-terrorism to help Sri Lanka better train its security forces to thwart any future terrorist threat.“We wish to strengthen our cooperation in ridding our countries of this menace and we can do it by learning from experiences of each other,” Foreign Minister Shah Mahmood Qureshi told reporters at a press conference.Both Pakistan and Sri Lanka have had extensive experience in fighting terrorism, both at the hands of home grown and foreign trained groups that have killed thousands and caused damages of billions of dollars, prompting both sides to raise special forces to counter the threat.

Foreign Minister Qureshi, who is part of President Asif Ali Zardari’s delegation on a four-day visit to Sri Lanka, said the two countries have had close cooperation in training of defence personnel in the past.

He said Pakistan had trained thousands of policemen to deal with terrorists effectively and had improved the techniques with experience, which were being used to successfully thwart terrorist attempts.

Pakistan over the years had raised special elite units of police trained by local and international counter-terrorism experts and the Special Services Group of the Pakistan Army. These units were trained in guerilla warfare, bomb disposal and modern investigative techniques to foil acts of terrorism.

He said during the talks with the Sri Lankan leaders, President Zardari offered barter trade wherein Pakistan can supply cement and sugar plants, and get in return tea, betel leaves or other products.

“The objective is to broaden the bilateral trade and optimally benefit from the Free Trade Agreement and the Bilateral Investment Treaty already in place.”

He said Pakistan has also offered to open a branch of National Bank in Colombo, on reciprocal basis, to offer swifter business transactions and facilitate the two private sectors.

Qureshi said the two countries also needed to enhance cooperation in tourism as it would not only generate economic activity but also bring the two people closer. He said Pakistan had a lot to learn from the hospitality sector of Sri Lanka and could gain from its experiences.

He said,”Pakistan has rich cultural heritage and centuries old Buddhist civilization that needs to be explored by the people from Sri Lanka”.

He hoped that with the resumption of PIA flights from March 2011, the two countries would be connected throughout the week and ease business and tourism travellers.