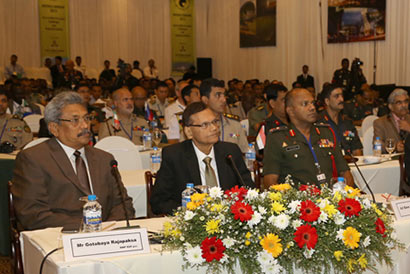 Making the keynote address at the 3rd consecutive Sri Lanka Army organized ‘Defence Seminar-2013 on the theme ‘Post-Conflict Sri Lanka: Challenges and Regional Stability’, held from 3rd to 5th September at the Galadari Hotel, Colombo, Secretary Defence Mr. Gotabaya Rajapaksa delivered a spectacular and visonary speech to the more than 300 participants including 66 foreign delegates from 29 countries.

a) access to personal and other documentation without discrimination

Note: Only 29% of respondents had negative views on military presence.

Secretary Defence on shifting military from combat with terrorists to cooperation with civilians/society:

Number of civilian casualties (during final stage of war) ranged from 7000 to more than 40,000. The allegations were all guestimates without sources and ignored independent and credible sources (Dept of Census & Statistics/UNICEF/LLRC).

If LTTE had 30,000 approximate cadres at the start of the Humanitarian Operation and nearly 12,000 surrendered to the Armed Forces either the remaining had been killed, they are posing as civilians or have fled the country.

It must be also noted that Sri Lanka lost nearly 6000 of its personnel in combat while 20,000 or so were injured. Such a number of casualties in the army could not have happened if the enemy was not engaged in intense battle with the Sri Lankan military during the final stages of the war.

a. 7896 deaths due to unnatural causes (Jan-May 2009) included LTTE cadres killed in action,

b. 2635 persons reported as untraceable (parents/next of kin had not recovered their bodies or knew their whereabouts)

c. Of 2360 cases investigations reveal that 1625 persons had been forcibly recruited by the LTTE.

d. Only 26 instances of people reported by the next of kin who had surrendered to the Security Forces and subsequently disappeared.

Those making allegations against the Sri Lankan military may like to explain how any military should confront a non-state actor using asymmetric warfare strategies with no compunctions to safeguard civilian lives and oft times using civilians as human shields in order to attract external intervention and to once again gain themselves breathing space?

Those throwing stones at the Sri Lankan military may also like to explain why LTTE would deliberately and repeatedly launch artillery and mortar attacks at the military from No Fire Zones/ civilian installations like hospitals and churches which were created for the civilians and not for LTTE to place their weapons and ammunition or take refuge amongst the Tamil civilians?

a. Tamil Coordinating Committee based in Norway led by Nediyawan

b. Transnational Government of Tamil Eelam in US led by Rudrakumaran

d. Global Tamil Forum led by Father Emmanuel who coordinates all above groups.

A fine picture of Sri Lanka’s future was articulated in the key note address by the Secretary Defence covering the immediate post-war challenges, the achievements of the armed forces in their new role of capacity building in cooperation with civilians and society. It has heralded a distinctly unique partnership one that combines the value-added logistical capabilities and discipline of the armed forces with the new challenges that face a Sri Lanka journeying towards a future without terrorism and ushering a new chapter in uniting nations of the Asian continent for regional stability, economic growth and overall a shared future.