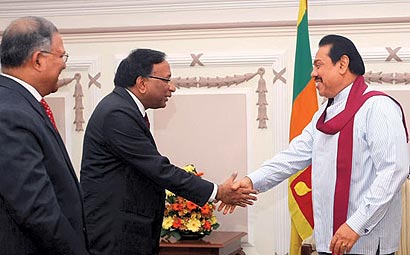 The longstanding good defence relationship between India and Sri Lanka should be further expanded and strengthened, Indian Defence Secretary Pradeep Kumar said when he called on President Mahinda Rajapaksa at Temple Trees yesterday.

The defence dialogue on promoting bilateral relations between the two countries should be further extended to include infantry and air force, the Indian Defence Secretary said.

It was agreed that the two countries will have a joint naval exercise in Sri Lankan waters next year. The Indian Defence Secretary informed President Rajapaksa that India will offer more training opportunities for the Sri Lankan Security Forces personnel in the future.

An Indian Air Force demonstration will be held in line with the Diamond Jubilee celebrations of the Sri Lanka Air Force next year, he said.

President Mahinda Rajapaksa acknowledged the continuing good relations between Sri Lanka and India and welcomed the initiatives to strengthen defence cooperation in between the two countries.