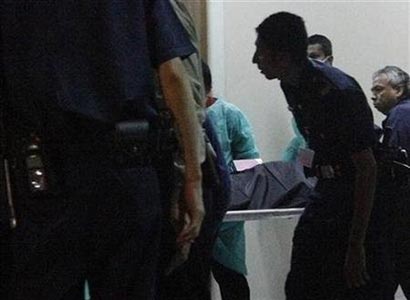 SINGAPORE (Reuters) – The gang rape victim whose assault in New Delhi triggered nationwide protests died of her injuries on Saturday in a Singapore hospital, potentially threatening fresh protests in India where her case is a rallying point for women’s rights.

The 23-year-old medical student, severely beaten, raped and thrown out of a moving bus in New Delhi two weeks ago, had been flown to Singapore in a critical condition by the Indian government on Thursday for specialist treatment.

“We are very sad to report that the patient passed away peacefully at 4:45 a.m. on Dec 29, 2012 (2045 GMT Friday). Her family and officials from the High Commission (embassy) of India were by her side,” Mount Elizabeth Hospital Chief Executive Officer Kelvin Loh said in a statement.

Most rapes and other sex crimes in India go unreported and offenders are rarely punished, women’s rights activists say. But the brutality of the December 16 assault sparked public outrage and calls for better policing and harsher punishment for rapists.

The case has received blanket coverage on cable television news channels. The woman has not been identified but some Indian media have called her “Amanat”, an Urdu word meaning “treasure”.

“We are saddened to learn that she has succumbed to her injuries, and would like to extend our deepest condolences to her family during this time of bereavement,” Singapore’s Ministry of Foreign Affairs said in a statement.

Earlier on Friday, the hospital had reported that the woman’s condition had taken a turn for the worse. It said that her family had been informed and were by her side.

T.C.A. Raghavan, the Indian High Commissioner to Singapore, said after her death that the family had expressed a desire for her body to be flown back to India. Moments later, the woman’s body was loaded into a van and driven away.

Talking to reporters earlier on Saturday, Raghavan declined to comment on reports in India accusing the government of sending her to Singapore to minimise the possible backlash in the event of her death.

Some Indian medical experts had questioned the decision to airlift the woman to Singapore, calling it a risky manoeuvre given the seriousness of her injuries. They had said she was already receiving the best possible care in India.

Prime Minister Manmohan Singh’s government has been battling criticism that it was tone-deaf to the outcry and heavy handed in its response to the protests in the Indian capital.

“It is deeply saddening and just beyond words. The police and government definitely have to do something more,” said Sharanya Ramachandran, an Indian national working as an engineer in Singapore.

“They should bring in very severe punishment for such cases. They should start recognising that it is a big crime.”

The Singapore hospital said earlier that the woman had suffered “significant brain injury” and was surviving against the odds. She had already undergone three abdominal operations before being flown to Singapore.

Protests over the lack of safety for women erupted across India after the attack, culminating last weekend in pitched battles between police and protesters in the heart of New Delhi.

New Delhi has been on edge since the weekend clashes. Hundreds of policemen have been deployed on the streets of the capital and streets leading to the main protest site, the India Gate war memorial, have been shut for long periods, severely disrupting traffic in the city of 16 million.

Commentators and sociologists say the rape has tapped into a deep well of frustration that many Indians feel over what they see as weak governance and poor leadership on social and economic issues.

Many protesters have complained that Singh’s government has done little to curb the abuse of women in the country of 1.2 billion. A global poll by the Thomson Reuters Foundation in June found that India was the worst place to be a woman because of high rates of infanticide, child marriage and slavery.

New Delhi has the highest number of sex crimes among India’s major cities, with a rape reported on average every 18 hours, according to police figures. Government data show the number of reported rape cases in the country rose by nearly 17 percent between 2007 and 2011.