Delhi Police uncover how heroin is smuggled to Sri Lanka 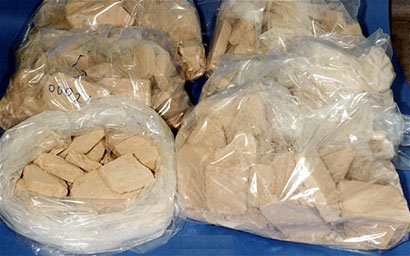 With the arrest of three men in Chennai including two Sri Lankan nationals and recovery of heroin worth Rs 50 crore, the Special Cell of the Delhi Police has claimed to have busted an international drug cartel.

“They were arrested by us in a joint operation with thelocal police from Chennai yesterday,” he said.

The accused are being questioned to ascertain if they also have any links with any terror outfit or Pakistan’s Inter-Services Intelligence (ISI), police said.

During investigations, police had learnt that heroin was smuggled into India from Afghanistan via Pakistan using Jammu and Kashmir, Punjab and Rajasthan borders and concealed inside tin boxes of processed food before being further supplied to Sri Lanka, police said.

The Special Cell had been looking for Mailu Perumal, a notorious drug peddler for the last several months.

In July this year, a consignment of 36.214 kg heroin was seized and six persons were arrested by the Special Cell.

The accused had said that they were being handled by Mayelerum Perumal of Chennai, who was the main link for foreign based narco-mafias, they said.

Following this, a police team worked to locate Mayelerum Perumal for the next four months.

“The efforts bore fruit when an input was received that Mailu has accumulated a large consignment of heroin at a safe house in Chennai and the same was to be received for onward trafficking by some Sri Lankan nationals who had arrived for the purpose in India,” said Ranjan, adding that a team was sent to Chennai to arrest the accused.

Approximately 16 kg heroin worth Rs 50 crore concealed inside processed food cans was recovered from them. An FIR has been lodged at Poonamalle Police Station in Chennai, he said.

The trio told the police that the smuggled heroin is packed by emptying cans containing pre-cooked or processed food and kept at safe houses before being sent to Sri Lanka for onward consumption and peddling, police said.

Mailu is an expert in managing heroin movement into India and there forward movement as decided by narco-mafia in West Asia and Afghan-Pak region, he added.

During the last few months, the Special Cell has been working on trans-national narcotics syndicate and has seized around 130 kg heroin worth nearly Rs 400 crore, PTI reported.