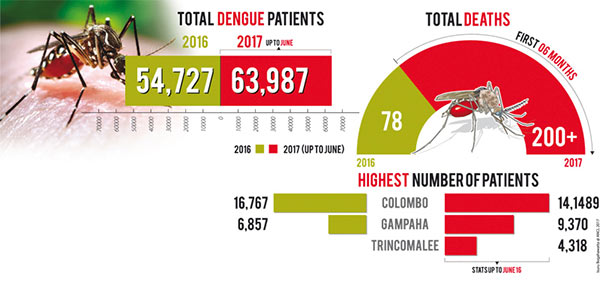 A new strain of the dengue virus has claimed over 200 lives, with 63,987 patients detected, during the first half of the year. The new virus, identified as Type 11 is distinct from the ones which affected the country during the past five years.

This is in marked contrast to the figures diagnosed last year. By the end of 2016 a total of 54,727 dengue patients and 78 deaths were reported for the entirety of last year. Hospitals including the Jayawardanapura Teaching Hospital, and the Infectious Deaseas Hospital (IDH) rejected patients diagnosed with dengue due to lack of space. The Epistemology Unit confirmed that 27,272 patients were reported from the Western Province. The Colombo district recorded the highest number of dengue patients 14,189 in the country while Gampaha district recorded the second highest number of dengue patients which is 9,370.

The Colombo Municipal Council (CMC) reported a total of 2,740 dengue patients during this year by June 16,2017. Other areas in the Colombo district recorded 11,449 dengue patients. The CMC in a report released yesterday said that 52% of those diagnosed with the virus were under 18 years of age. The Jayawardenapura hospital did not admit patients last afternoon but was scheduled to reopen for the patients in the evening. Since June 15th, dengue patients were diverted from IDH to NHSL, Colombo North and Colombo South Teaching Hospitals, Thalangama, Piliyandala and Wethara hospitals to ease the congestion of the IDH.

However, speaking to Daily News, Dr. Anil Jasinghe the Director of the National Hospital Colombo said they were fully equipped and were providing all the treatment to patients affected by the fever.

Dr.Jasinghe said that the Hospital has increased its surge capacity and allocated a cubicle with eight beds from each ward exclusively for dengue patients. A nurse with specialized training manages each cubicle, he said.

According to Dr.Jasinghe, two beds from each cubicle function as a High Dependency Unit with all facilities for monitoring and managing serious dengue patients. The total number of 120 beds have been allocated for cubicles from 15 wards.

The nurses who manage cubicles are especially trained for the task. Shortly a total of 60 High Dependency beds will be available in NHSL for dengue patients. The present number is 30 beds .

A total of 32 nurses and a group of doctors had been trained at IDH by Consultant Physician Dr. Ananda Wijewickrama, one of the leading dengue specialist in the country.

Now they are serving dengue patients receiving medical treatment in cubicles. The Director of the IDH had been informed to divert dengue patients from its OPD to NHSL, he said.

Dr.Harith Tissera the Cordinator of the National Dengue Control Programme said the new type of fever was in stark contrast to the previous fevers the country experienced.

Dr.Tissera said the current epidemic is of Type 11 of the virus. Since 2009 the country was affected by the Type 1 virus.

1 Response to Dengue kills over 200