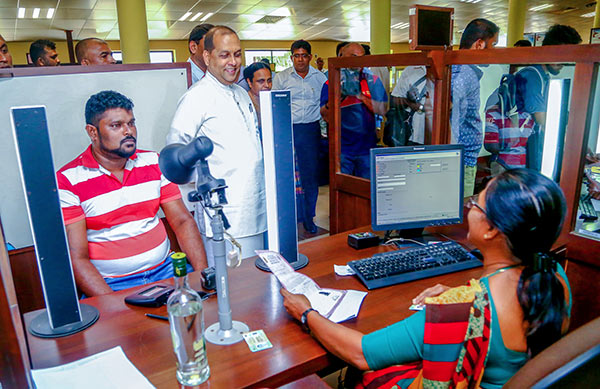 Passenger Transport Management and Power and Energy Minister Mahinda Amaraweera said yesterday that people whom he had met at the Werahera office branch of the Department of Motor Traffic had told him that the customer service at the branch has now been streamlined following the sudden inspection tour by President Gotabaya Rajapaksa two weeks ago.

Minister Amaraweera had visited the RMV Werahera branch yesterday to participate in the progress review meeting and he had spoken to several people who had come there to obtain the services of the RMV.

They told the Minster that work at the RMV branch has now been expedited following the sudden visit by President Gotabaya Rajapaksa.

Accordingly, drivers’ licences are now being issued in just two hours if the paperwork has been correctly completed. Moreover, once the driving licence is ready, the licence-holder receives an SMS on his or her mobile phone.

The Minister also instructed officials at the Werahera branch to carry out all the directions issued by President during his visit.

He also said that priority should not be given to any customer who is in the queue and the service should be provided according to the token numbers issued to customers.