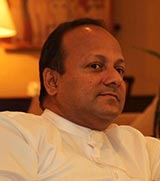 Deputy Minister of External Affairs, Hon. Neomal Perera, made an official visit to the Czech Republic from 24-27 October 2012 for annual bilateral consultations with the Ministry of Foreign Affairs of the Czech Republic.

The Deputy Minister met with his counterpart Hon. Thomas Dub and senior officials of the Czech Republic on 26th October 2012, to discuss issues of mutual interest, including cooperation in economic, trade, cultural, education and scientific areas. Deputy Minister Perera briefed his counterpart on recent achievements made by the Government of Sri Lanka in economic development, peace building and reconciliation. The Czech Deputy Foreign Minister appreciated Sri Lanka for its positive accomplishments, assuring his country’s continued support for the development of Sri Lanka.

The two delegations identified higher education and sports as important areas of bilateral partnership. It was decided that increased exchange of students and academicians and training of Sri Lankan athletes in the Czech Republic would help  promote people to people contact.  It was also agreed to explore the possibility of commencing direct air links with a view to increasing tourism between the two countries was also explored.  The Czech Republic thanked Sri Lanka for the recent gifting of two elephants to the Prague Zoo, which attracts more than 10 million visitors each year.

Deputy Minister Perera visited a Session of the Parliament of the Czech Republic on 25th October 2012 and met with the Members of the Foreign Affairs Committee of the Chamber of Deputies.  The Deputy Minister briefed the Czech Parliamentarians on the ongoing development programme in Sri Lanka, especially in the North and the East and the vast potential for bilateral cooperation, in trade, investment and tourism sectors.  Several Members of the Committee will be shortly visiting Sri Lanka to further enhance bilateral cooperation and witness the development work being carried out by the Government of Sri Lanka in these regions as well as in the rest of the country.

The Deputy Minister also addressed the International Chamber of Commerce on Sri Lanka’s economic opportunities, which was followed by a question and answer session.  Several representatives from the business sector showed keen interest in investing in tourism infrastructure development, food processing, dairy farming, and apparel industry in Sri Lanka.