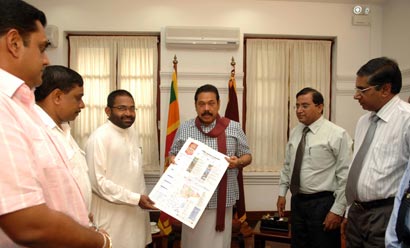 Progress report of the’Deyata Kirula- 2011’ Development Exhibition which was held in Buttala area in Monaragala district concurrently with the 63rd Independence Day celebrations, presented to President Mahinda Rajapaksa by the Chairman of the Exhibition Organising Committee Minister Ranjith Siyambalapitiya at the Temple Trees on 16 February.

Expressing his ideas, the President thanked all including the Ministers, local politicians, government officials, Police, three armed forces and the general public who helped in numerous ways for the success of the Deyata Kirula-2011.

This year Deyata Kirula (Crowning the Nation) exhibition held under the theme of Aascharyaye Kirula (Crown of Wonder) from 04 to 10 February. There were altogether nearly 300 exhibition stalls at the site, out of which 100 stalls were from the private sector institutions.

In conjunction with the exhibition, massive infrastructure development projects carried out in the Moneragala district during the last few months covering road, water supply, electricity, health, housing and local school development projects. Vesting of all those projects to the people of the area took place during the Exhibition Period.