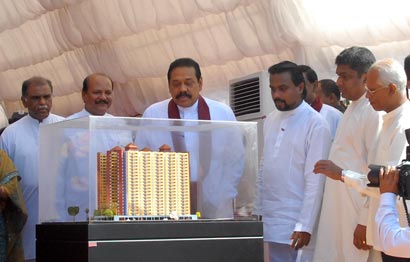 “The aim of the government is not to evict poor people from shanties, but to allow them the right to live in decent houses in a more appropriate environment. The slum dwellers should not be slum dwellers forever. These people are denied basic facilities throughout the history. So they fall victims to floods, deceases and various social anomalies. Therefore as a government it is our duty to provide them safe and healthy housing facilities and protect and improve neighborhoods”, President Mahinda Rajapaksa made these remarks at the launch of one million houses project under the Jana Sevana National Housing and Habitat Development Programme on Wednesday 16 February 2011.

The foundation laying ceremony for new 21 storey housing Complex to construct 560 houses took place at the Mihindupura Flats located at Edmonton road in Kirulapone. At the ceremony, the President further said that the core philosophy in the ‘Mahinda Chinthanaya- Extended Version’ was to uplift every family by fostering the individual and thereby contributing to the development of the village and finally the entire country. He also invited everyone to join hands irrespective of political and other differences to make ‘Jana Sevana’ a success and thereby realise the goal of ‘shelter for all’ making every family a proud owner of a decent house.

‘Jana Sevana’ Housing Development programme aims to provide housing facilities for all communities of the society and will be implemented at village, district and provincial levels. One million houses would be constructed under this programme throughout the Island within the next six years. Phase one of the project comprises 560 houses at Mihindupura, Kirulapone and it will be completed within two years. Sixty thousand houses are to be constructed during this year.