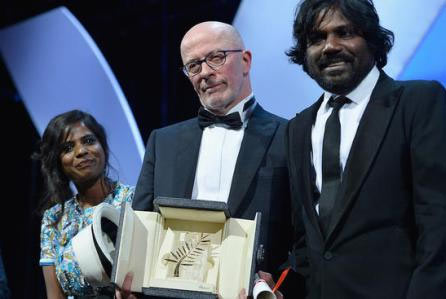 ‘Dheepan’ has won the top prize at the 68th Cannes Film Festival, the Palme d’Or. The Jacques Audiard-directed drama, which centres on refugees fleeing post-civil war Sri Lanka for a life in France, surprisingly claimed the coveted award after being selected by a judging panel led by acclaimed US filmmakers Joel and Ethan Coen.

The French director, whose previous credits include ‘A Prophet’ and ‘Rust and Bone’, told the BBC: “To receive a prize from the Coen brothers is something pretty exceptional. I’m very touched.”

Meanwhile, Joel Coen said: “This isn’t a jury of film critics. This is a jury of artists who are looking at the work.”

Elsewhere, ‘Son of Saul’ – a Holocaust drama – won the Grand Prix prize, which is essentially the runner-up award, while Vincent Lindon won Best Actor for his role in Stephane Brize’s ‘The Measure of a Man’.and Rooney Mara and Emmanuelle Bercot shared the Best Actress gong.

‘Son of Saul’ was directed by Hungarian newcomer Laszlo Nemes, who reflected: “This continent is still haunted by this subject.”