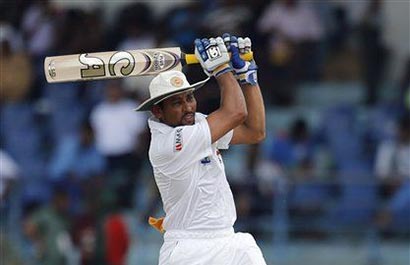 (Reuters) – Tillakaratne Dilshan blasted a swift half-century as Sri Lanka ended the first session of the first test against Bangladesh on 132 for one wicket on Friday.

After Angelo Mathews had won the toss on his test debut as captain, Sri Lanka openers Dimuth Karunaratne and Dilshan soon found their stride, scoring runs comfortably against a bowling attack that lack penetration.

However, with the score at 46, Karunaratne (15) was forced to retire hurt when he tried to pull a delivery from Shahadat Hossain and took a blow on his left elbow.

Kumar Sangakkara joined Dilshan at the crease and the pair took the score to 114 with Dilshan completing a fine half-century off 59 balls with an on driven boundary off Elias Sunny.

But his joy was short-lived when on 54 he came down the track to spinner Sohag Gazi and offered a low catch to Mominul Haque at mid-off.

Karunaratne having recovered from the blow resumed his innings at the fall of Dilshan’s wicket and at lunch was unbeaten on 20.

Sangakkara playing his first competitive match since December was in fine touch, driving and cutting his way to an unbeaten 44 which comprised five fours.