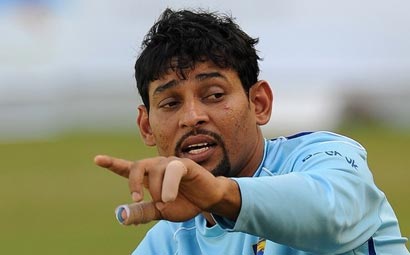 The ambitious rebuild of Sydney Thunder after two years of Big Bash League woe has continued with the signing of swashbuckling Sri Lankan opener Tillakaratne Dilshan.

The Thunder’s decision to strongly pursue the 37-year-old after he announced his Test retirement last month, freeing him for the majority of the BBL from late December to January, was rewarded by his acceptance of its offer.

Dilshan said two of the key factors in joining the Thunder were his relationship with former Sri Lanka international Chandika Hathurusinghe, who has taken over as the team’s coach, and a desire to play for the first time with retired Australian great Mike Hussey, the team’s marquee recruit.

”So far we’ve always played … on different teams and sometimes we’ve had arguments, so it’s nice to have the chance to play together. It’s another experience for my career,” he said.

Dilshan ranks fourth for runs in Twenty20 internationals, behind only Brendon McCullum, Mahela Jayawardene and David Warner, and once made an unbeaten 104 from 57 balls against Australia. Third-placed Warner will be a teammate at the Thunder, pending national team availability.

Dilshan, who is also a handy off-spinner, thrived on Sri Lanka’s one-day series visits here in the past two summers, during which he made two centuries and three half-centuries.

He was first due to play in the Big Bash in 2010-11 for NSW under the old state-based competition, but was blocked from doing so because Sri Lanka Cricket did not want him to risk injury before the 2011 World Cup. He said he had never abandoned his ambition to play in the BBL, which he declared was a superior T20 competition to all bar the Indian Premier League.

”I’m really keen to play in the Big Bash. It’s such a wonderful, competitive tournament,” he said.

”I’ve been hoping to play for the past three years but [each time] I’ve had to go for international duty. This year I’m free to play almost the entire tournament. It’s really exciting. I’ve always enjoyed Australian wickets, with the extra bounce. I’m really eager for this opportunity.”

Dilshan will miss the Thunder’s first two matches due to Sri Lanka’s limited-overs series against Pakistan, which ends on December 27.

Once he arrives he will officially succeed Chris Gayle as the team’s primary international player, with England’s Eoin Morgan to depart early due to international duty.

Dilshan said he was aware of the team’s significant struggles over the past two years and did not promise his best could match the best of Gayle, arguing the West Indian was incomparable. But he said he was impressed by the pre-tournament planning of Hathurusinghe and Hussey.

”I can’t do it alone,” he said. ”As a team we have to work hard. This year I think a lot of good players will be there and, like in any tournament and especially in T20, if you start well it can be important … then that confidence can carry on throughout the series.”

Dilshan predicted the BBL would be good preparation for his subsequent involvement in the Asia Cup one-day tournament and the World Twenty20, to be held in Bangladesh in April. He said a bonus would be being able to face countrymen Muthiah Muralidaran and Lasith Malinga, who play for Melbourne Renegades and Melbourne Stars, respectively.

”They’re two of the great bowlers in the world,” he said. ”I’ve played against them in the IPL and some domestic competitions, and it’s exciting to play against them again in different teams.’ (The Age)