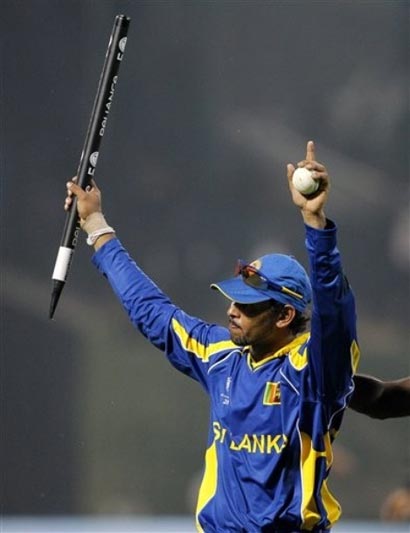 When Elton Chigumbura chose to bowl in Pallekele, to avoid his spinners having to struggle with a dew-soaked ball, little did he think his team would fail to take a wicket for 44.3 overs. But Tillakaratne Dilshan and Upul Tharanga batted forever, notching up the first double-century opening partnership in World Cup history, and their hundreds set up Sri Lanka’s victory, officially securing their place in the quarter-finals.

The result was a foregone conclusion once Sri Lanka scored 327 but there was a flutter of hope in the Zimbabwe camp when Brendan Taylor was at the forefront of the pursuit. He combined orthodoxy and innovation during an aggressive half-century, taking advantage of a wayward Sri Lankan pace attack. The hosts gathered themselves, though, and struck twice at the other end after a century opening stand. Taylor eventually departed for 80 in the 25th over, and with him ended Zimbabwe’s improbable chances.

The struggle of Zimbabwe’s batsmen was in contrast to the ease with which Dilshan and Tharanga had entertained a packed house. They started at top speed, taking 84 of the first 11 overs by playing a shot a minute, and then shifted to a lower gear, bleeding Zimbabwe steadily and so easily through the middle overs. There were regular bursts of acceleration later in the innings and a concerted push during the final ten overs. At no stage were they bothered and rarely has a bowling performance looked so toothless – Chris Mpofu’s shout after striking Tharanga’s pad with the first ball of the game was the only appeal against the openers. Tired shots, rather than incisive bowling, brought about the dismissal of Tharanga and then Dilshan, and more middle-order wickets fell as batsmen came, swung and pushed the total beyond 300.

Tharanga threaded the fourth ball through point with a square drive and Sri Lanka were away. For the first time in the tournament Chigumbura did not use Ray Price with the brand new ball and gave the second over to Tinashe Panyangara. It was a costly decision as Dilshan ran amok, driving the full balls, and cutting and pulling the short ones to take 18 runs off the over.

There was no let-up in Sri Lanka’s pace during the mandatory Powerplay, off which they scored 77. Dilshan and Tharanga slashed through point, pulled through square and then drove when the length was too full, punishing everyone who bowled at them. When Price was brought on in the fifth over, Dilshan skipped down and drove him inside out through cover.

Not until the 12th and 13th over was there spin from both ends and then Price bowled the innings’ first maiden. The spin trio of Price, Prosper Utseya and Graeme Cremer began to exercise more control over the run-rate, which dipped below six for the first time in the 19th, but they failed to take a wicket. Tharanga and Dilshan seamlessly shifted to a lower gear and focused on accumulation.

Zimbabwe’s spinners had conceded only 76 runs off 17 overs when Chigumbura gave pace another run by bringing himself on. Dilshan slapped a wide offering through cover to move to 99 and then reached his century off 95 balls, his first in World Cups. Panyangara returned and Tharanga immediately lofted over mid-off and pulled past fine leg. Sri Lanka took 30 off overs 31-33.

Tharanga and Dilshan broke Saeed Anwar and Wajahatullah Wasti’s World Cup record of 194 for the first wicket and then became the first openers to score hundreds in the same World Cup innings. They reached 200 in 33.4 overs. During the batting Powerplay, taken in the 41st over, Tharanga’s inside-out play through cover was exquisite. With the highest opening partnership in ODIs – 286 between Sanath Jayasuriya and Tharanga at Headingley 2006 – within striking distance, Tharanga holed out to deep cover, bringing Zimbabwe some relief. Dilshan followed in the next over, leaving the finishing touches to his well-rested team-mates.

As impressive as Sri Lanka’s display was, Taylor played some of the best shots of the game. Using Malinga’s pace, Taylor flicked a low full toss to the backward square-leg boundary, pushed a wide one through covers and chipped a short one over Kumar Sangakkara’s head. There was only touch and timing in those shots, no power. Taylor got to his fifty off 39 balls and carried on batting aggressively.

Muttiah Muralitharan came on only in the 16th over, after the bowling Powerplay was completed, and in the 20th he spun a doosra on to Regis Chakabva’s off stump, ending the opening stand on 116. Tatenda Taibu was bent on reverse-sweeping Murali whenever he could, and got away with it. He didn’t get away with edging Angelo Mathew though, and Sangakkara dived to his right to take the catch inches off the ground.

Those two wickets set back Zimbabwe’s chase considerably, and Taylor’s dismissal was the definitive blow. On 80, he chipped a slower ball from Angelo Mathews straight to midwicket and the contest was over. Dilshan returned to torment Zimbabwe, picking up four batsmen – his finishing touches on a terrific game. And Murali, playing his final ODI in front of his home crowd, took the final wicket. 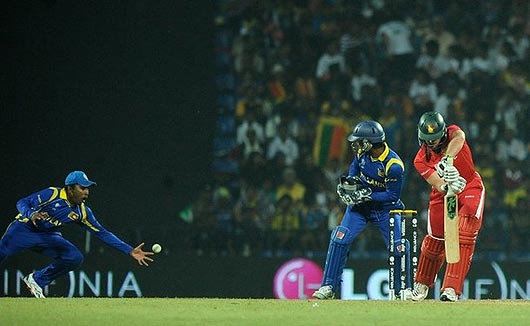