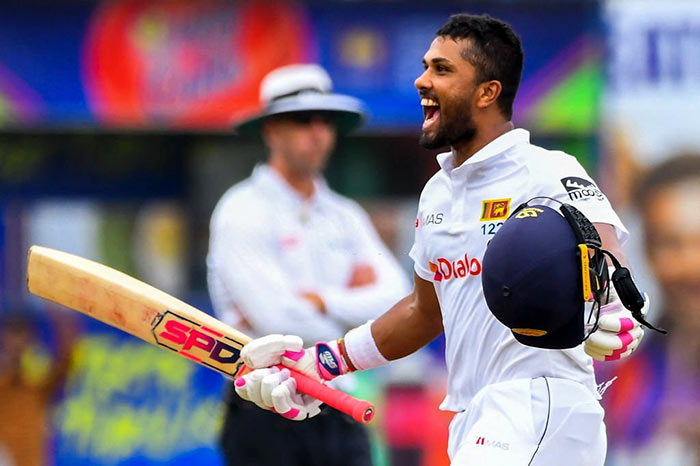 Sri Lanka’s Dinesh Chandimal celebrates after scoring 200 runs during the fourth day of the second cricket Test match between Sri Lanka and Australia at the Galle International Cricket Stadium in Galle on July 11, 2022. (Photo by ISHARA S. KODIKARA / AFP via Getty Images)

Sri Lankan batsman Dinesh Chandimal has scored his maiden double-century in the second Test against Australia in Galle today (July 11).

He also became the first Sri Lankan Cricketer to score a double-century against Australia.

Dinesh Chandimal remained unbeaten on 206 off 326 balls as Sri Lanka were bowled out for 554 runs.

He pulled a legside Starc full toss aerially for another four and immediately followed that up with a pair of monstrous sixes down the ground to bring up his first double ton.

Chandimal’s 206 not out is the highest score by a Sri Lankan against Australia. His incredible innings featured 16 fours and five breathtaking sixes.

He surpassed the epic 192 scored by Kumar Sangakkara in the 2007 Hobart Test.