Diplomats concerned by state of emergency in Sri Lanka 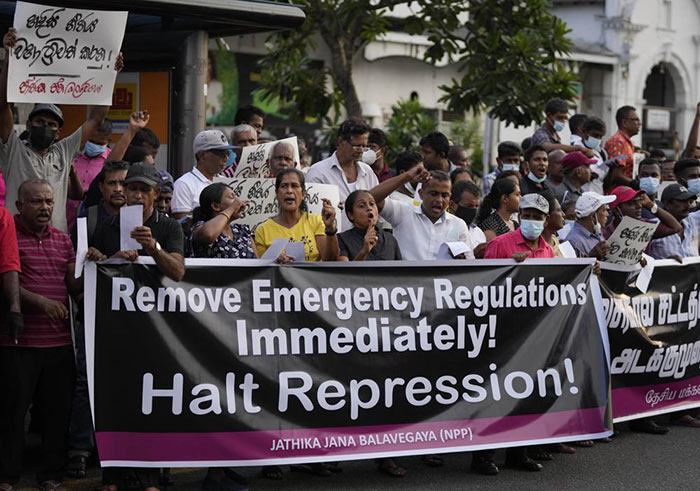 Rajapaksa issued a decree Friday declaring a public emergency. It empowers him to authorize detentions, property seizure and search of any premises. He can also change or suspend any law in the interests of public security and for the maintenance of essential supplies.

Sri Lanka is near bankruptcy. It has been rocked by months of street protests blaming Rajapaksa and his close family members, who have dominated politics for years, for economic and debt mismanagement that has created massive shortages of basic supplies, electricity and medicines.

The government has suspended repayment of its foreign loans and its usable foreign currency reserves have plummeted below $50 million. The country has $7 billion in foreign loan repayments due this year out of the total foreign debt of $51 billion.

Police used tear gas and a water cannon twice Friday at protesters near the Parliament building who were criticizing lawmakers for not ousting the president and the government, headed by his brother, Mahinda Rajapaksa. Protesters are angry that lawmakers elected a government-backed deputy speaker of Parliament by a large majority in what was seen as a key victory for the governing coalition.

U.S. Ambassador to Sri Lanka Julie Chung tweeted Saturday that she is “concerned” by the state of emergency, adding that “the voices of peaceful citizens need to be heard.”

“And the very real challenges Sri Lankans are facing require long term solutions to set the country back on a path toward prosperity and opportunity for all. The SOE (state of emergency) won’t help do that,” Chung added.

Canadian Ambassador David McKinnon said Sri Lankans have a right to peaceful protest under democracy and that it is “hard to understand why it is necessary, then, to declare a state of emergency.”

The declaration of emergency came on the same day that shops, offices, banks and schools closed across the country for a shutdown in protest against the president and his family. Trade unions have warned of continued strikes from May 11 if they do not resign by then. An occupation of the entrance to the president’s office continued for a 29th day Saturday.

The government said Saturday the emergency was declared to create political stability so that reforms can be implemented to help resolve the economic crisis.

It also said the emergency status would help create necessary conditions for negotiations with the International Monetary Fund and other agencies and countries for financial assistance and debt restructuring.

“The emotive protests organized in the capital and many parts of the country have become a threat to public safety,” a government statement said, adding that continued protests will only aggravate the economic difficulties.

Amnesty International said protests have been peaceful and the authorities have unlawfully restricted the right to freedom of peaceful assembly.

Home » Diplomats concerned by state of emergency in Sri Lanka