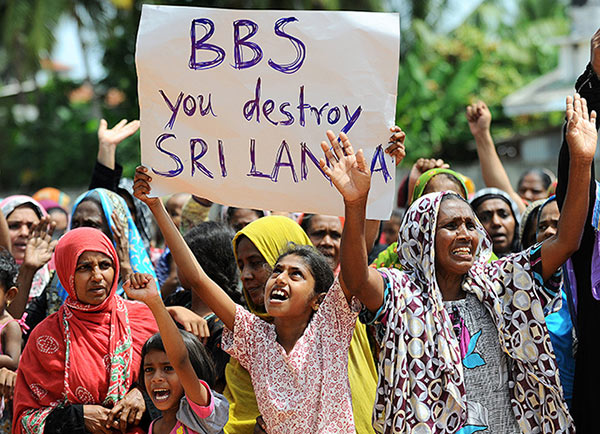 Diplomats on Thursday condemned violence against Muslims in Sri Lanka and urged the government to uphold minority rights and freedom of religion.

More than 20 attacks on Muslims have been recorded since April 17, including arson at Muslim-owned businesses and petrol-bomb attacks on mosques.

Muslims have blamed the attacks on Bodu Bala Sena (BBS) or the “Buddhist Power Force”, an organization that says the spread of Islam is a threat to Buddhism as the dominant religion. It denies any involvement.

“It is important that the rule of law be applied against those perpetrators and it’s important that minority rights and freedom of religion are upheld,” one of the diplomats, Canadian high commissioner Shelley Whiting, told reporters.

President Maithripala Sirisena and Prime Minister Ranil Wickremasinghe have ordered police to uphold the law, but the violence against Muslims has not ended.

Muslims comprise around 9 percent of Sri Lanka’s population of 21 million. Buddhists make up about 70 percent of the population.

Buddhist groups accuse some Muslim organizations of radicalizing the community and forcibly converting people to Islam. Muslim leaders have denied the claim.

Tung-Lai Margue, ambassador of the European Union, said he hoped the police would make arrests in the coming days.

“To my knowledge, this kind of collective public diplomatic intervention is unprecedented in Sri Lanka,” Alan Keenan, Sri Lanka project director at the International Crisis Group, said on Twitter.

In 2014, three Muslims were killed in riots stirred up by hardline Buddhist groups. President Sirisena was elected the following year after a campaign in which he promised to solve the issues faced by ethnic minority Tamils and Muslims.

Churches also have faced similar attacks in the past.