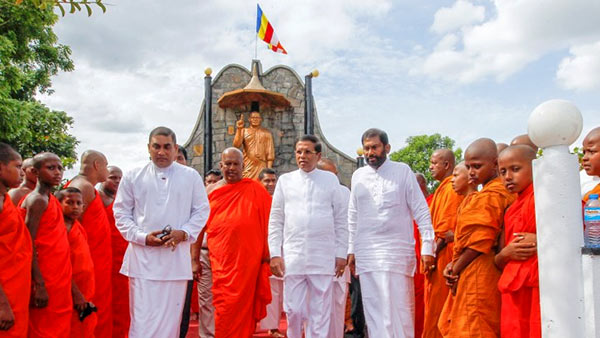 President Maithripala Sirisena says as we recall the sorrowful memories of a three decade long, brutal war, it is the responsibility of all to act in a way to prevent recurrence of such disastrous situation in the country.

Wherever criticisms were leveled against the Government, the present Government is committed to build a peaceful country where all the communities live in harmony and reconciliation.

He made these remarks participating in a Commemoration ceremony held at the Arantalawa International Buddhist Centre, to mark the 30th anniversary of the Aranthalawa massacre, yesterday (02).

The Aranthalawa Massacre took place on June 2, 1987, close to the village of Aranthalawa, in the Ampara District in which 31 Buddhist monks ,including the Adikarana Sanga Nayaka of the North and East Ven. Hegoda Sri Indrasara Thera and  three civilians were brutally killed by terrorists.

During the commemoration ceremony the President appreciated the great social and religious service rendered by the late Hegoda Sri Indrasara Nayaka Thera and paid a floral tribute to the statue of the Thera.

Later, the President joined in observing the memorial which was built to commemorate the assassinated Buddhist monks.