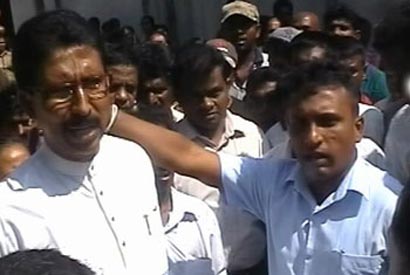 The United People’s Freedom Alliance has decided to conduct a disciplinary inquiry into the conflict between the Chairman and Deputy Chairman of the Kolonnawa Urban Council. Inquiries are to commence in regard to complaints made to UPFA General Secretary Susil Premajayantha by both parties involved.

A tense situation had prevailed in the city in the past two days due to a clash between the two groups which had erupted within the Kolonnawa Urban Council premises, it was reported.

However, the situation was brought under control following the intervention of Provincial Councilor Renuka Perera.

After the issue was brought into the UPFA General Secretary’s attention, he had instructed to submit a written complaint in order to determine the political action which could be taken, the Western {rovincial Council member said.

Minister Premajayantha had informed that relevant disciplinary investigation will commence after the submission is received and forwarded to the President, Renuka Perera stated.

Speaking to Ada Derana the Chairman of the Kolonnawa UC, Ravindra Udayashantha accused the Deputy Chairman of being “greedy for power,” and asserted that such individuals should be removed from politics.

Deputy Chairman of the Kolonnawa Urban Council, Suresh Kodaga was unable to be reached for comment.