DMK walks out of Lok Sabha, says India must vote against Sri Lanka in Geneva 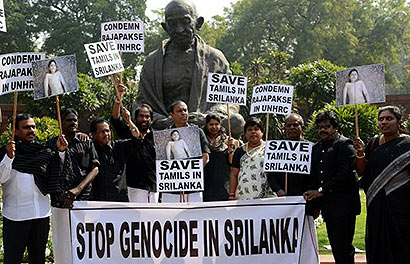 New Delhi: The DMK, which is the ruling Congress’ biggest ally in the UPA, today walked out of the Lok Sabha while External Affairs Minister Salman Khurshid was speaking, to bring pressure on the government to vote against Sri Lanka on a resolution expected to be moved by the United States when the top human rights body of the UN meets next week in Geneva. The resolution will focus on alleged war crimes by Sri Lankan defence forces as they defeated the Tamil Tiger rebels after a lengthy civil war in 2009.

Here is the Lok Sabha debate in 10 points:

Home » DMK walks out of Lok Sabha, says India must vote against Sri Lanka in Geneva