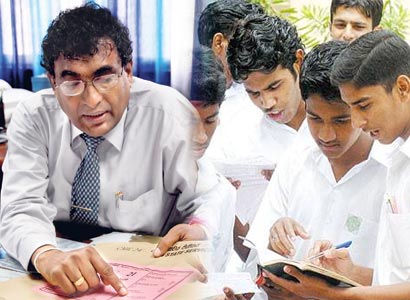 The outgoing Exams Chief Anura Edirisinghe spoke to the Sunday Observer to explain the reasons for the GCE Advanced Level district rank mishap and why students should not panic over the issue. He voiced concern over the attempts by different quarters with vested interests to blow the issue out of proportion and discredit hard earned reputation of the Sri Lanka’s Examinations Department.

Q: There are allegations over the decision to combine the two exams held under the old syllabus and new syllabus and issue a single Z-score for university admission. The critics claim the methodology is not transparent thus it is questionable?

A: This Z-score formula was invented by a committee comprising five university professors from Colombo, Peradeniya, Moratuwa and Sri Jayawardenapura Universities. They are experts in statistics with international knowledge in the subject.

The formula was approved by the Higher Education Ministry and was subject to endorsement by the Attorney General before it was put to use. It was not an overnight decision or an arbitrary occurrence.

There were 124 subjects in the GCE advanced level examination, 64 under the old and 60 under the new syllabus. This committee of five professors did a thorough study of the results of the 2011 Advanced level candidates obtained for these 124 subjects.

On December 23 and 24, the expert committee members sat with us and reviewed the results and the formula and the final nod was given to process the Z-scores. The decision to release the results were made after all this was completed. It was not an arbitrary decision of any individual institution.

I can vouch for the accuracy of the Z-score and if anyone is trying to question this. I must say their intention is to discredit this Department or embarrass the Government.

The uniqueness of a Z-score is that, it has the ability to iron out the disparities between two question papers of the same subject as well as disparities between two separate examinations. This has been assured by the experts and that was the principal reason why this particular formula was asked to be adopted by the Examinations Department to process the marks for university admission.

Q: The district rank of students indeed were flawed. What was the reason for this mishap?

A: A committee has been appointed by the President to probe this incident. If I explain what really happened in simple terms, we combined the new syllabus and old syllabus. Everyone was educated about this decision beforehand.

First we calculated the Z-scores and then the island rank. When it came to the district rank, some students in one district who sat for the exam as private candidates, under the old syllabus, were mistakenly added to the number of students in another district and visa versa. This led to the inaccurate district ranks being issued to candidates.

Q: Parent’s and students worry over the mishap with the district rank and they fear if the Z-scores have also been mixed up in a similar manner?

A:The district rank is calculated based on the island rank. The mishap happened after the Z-score and the island rank processing was completed. We investigated and found the point of error and now it has been rectified.

The district rank that we issue with the AL results, is an approximate gauge to show where he stands among the others in the district.

It is not an accurate reading and this will in no way be used to admit students for universities. I say this because we calculate this figure based on the number of candidates who sit for the exam from that particular district in the said year.

The population of candidates for a particular district for a said year can include students sitting the exam from other districts than his original place.

For instance there can be about 5,000 outside candidates sitting for the exam from Colombo district due to various reasons. But we need the correct district population of candidates for university admission.

It is clearly indicated in the results sheet that the district rank will not be considered for university admission, that this is just a temporary rank.

We have sought permission from the University Grants Commission to suspend the issuance of the district rank, because it is, in a way, a misleading figure, but their decision is still pending.

Their reluctance is understood as we have to be cautious when making changes to traditional practices.

The Supreme Court in a case heard by a bench comprising the Chief justice and three others in a ruling two months ago has also pointed out the futility of the issuance of the district rank. In this backdrop I feel the major hype over this district rank by different individuals is unfortunate.

Q: Do you suspect any foul play – tampering by some interested party with the results – to embarrass the Examinations Department or the Government as this would reflect badly on our records?

A: I do not believe there was any conspiracy or foul play . It must have been a genuine mistake at the point of feeding data.

These teacher trade unions and other groups with vested interests began the campaign against the GCE AL from as early as June.

There were statements from time to time that the results cannot be accepted, the decision to combine two exams were wrong, etc. The unfortunate mistake with the district rank gave them the necessary impetus.

Q:What can the students do if they want to verify the results?

A: They could apply for re-correction. We cannot go by what the political parties and others clamour for due to their personal agendas.

Up to today we have not got any written complaint from any AL candidate asking to verify their results, because they doubt the original results that have been issued by the Exams Department.

Q: What is the situation with the AL examination next year?

A: We will be holding the exam under the old syllabus for the last time next year. There is no issue with the new formula and we will be using the same formula to calculate the Z-score for university admission next year where there will be two exams under the old and new syllabuses for the last time. This was devised by a team of university professors and we did not compromise standard at any point.

Q: You will be retiring from service after a 30 long years at the Examinations Department, today (Dec 31). When did you join the Department?

I received Bachelor of Education special degree from Vidyodaya University in 1974. My first appointment was as a graduate teacher to Sinhala Maha Vidyalaya in Kalmunai in 1975. I was then transferred to Homagama MMV and to Pannipitiya Dharmapala Vidyalaya. During my tenure of seven years as the Commissioner General I made it a point to be a role model. I have utilised only 3 days of my personal leave and I have worked over 12 hours on most days. During the service at the Examinations Department I had the opportunity to undergo training in several foreign countries including Australia at the Council for Education Research. The training included Assessment/Evaluation Test Administration and School Based Assessment.

I have also undergone training at the Evaluation training wing of the Prinston University in the US and the Cambridge university’s Local Examinations Syndicate on developing and holding public examinations.