Driver, conductor sentenced to death for causing deaths of 41 passengers 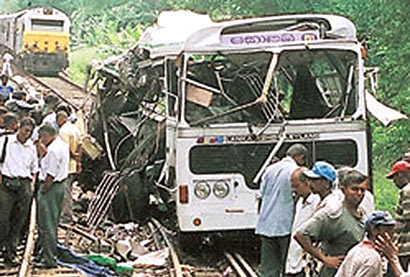 A file photo of Yangalmodara accident

The driver and conductor of a private bus, which was driven through a closed level crossing, at Yangalmodera in Alawwa and was hit by a moving train, causing the death of 41 passengers and injuring 35 others, were yesterday sentence to death by Puttalam High Court Judge Priyantha Fernando.

They were each found guilty on 76 counts including murder, causing grievous injuries to passengers and aiding and abetting in such acts.

Delivering the judgment, the Judge said the accused were given the maximum punishment as the charges against them had been proved beyond doubt by the prosecution.

He said the accused would be given the death sentence for being responsible for the deaths of 41 persons, while they were given another sentence of 10 years rigorous imprisonment to run concurrently  for causing injury to 35 persons.

The accused were also ordered to pay compensation of Rs. 5,000 each to the injured and in the event of their failure to pay the money, they were given another one-year sentence each.

The Attorney General indicted the two accused with 152 charges in the High Court of Kurunegala. After hearing the case for a period of over 2 ½ months, the Puttalam High Court Judge was assigned to hear the case.

The driver of the Colombo-Kandy intercity train, the passengers who travelled in the ill-fated bus and escaped death, a railway employee who worked on the track, those who witnessed the tragedy, drivers of vehicles parked close to where the accident took place, medical practitioners and policemen were called as witnesses.

The witnesses told court that the rail gate at Yangalmodera was closed and when the private bus bearing number NWHT2520, bound for Colombo from Wewala, Dambulla. reached the area there were a few vehicles stopped ahead of the bus. The conductor alighted from the bus and went up to the rail gate and signaled the driver to move forward. Then the driver moved to the right lane of the road and moved forward.

Bus driver Abdul Wahid Hafrool giving evidence before court said that he had no intention of killing anyone but attempted to take the bus across the rail track.

State Counsel Chethiya Gunasekera, leading the prosecution said that it was inevitable that any vehicle attempting to go across a closed rail gate would crash into a moving train and a person who had taken that risk could not be pardoned under any circumstances.

Defence Counsel Nalin Edirisinghe said that the accused had no intention killing anyone and the prosecution had failed to prove that point.

When the driver was asked by court whether he had anything to say before the judgment was delivered he said that as a believer of the Islam faith he asked for pardon in the name of Allah.

The conductor pleaded with Court saying that he would hereafter live as a good citizen and hence give him a lesser punishment.