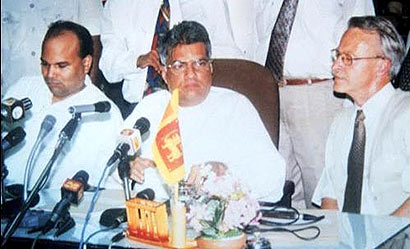 Winning hearts and minds of terrorists, mentality of surrender, advocating theory of “unwinnable war” and policy of appeasing, reducing the country to a pariah state, knowingly giving a terrorist organization status on par with a sovereign state and a democratic government were the characteristics of those led by Ranil Wickremasinghe that went on to sign 2002 infamous ceasefire agreement today described as one of the greatest betrayals of the nation.

The supporters of the ceasefire were those that equated the removal of checkpoints giving them freedom of movement as a victory for freedom and peace to the entire nation. Little did these people think what these “removals” and carte blanches would eventually mean to the entire nation.

Lust for power is no different from those unwilling to give up power. Similarly, those that hunger for personal glory and international acceptance rarely view what is good for the nation above their personal gains. These weaknesses as one should view them led to the blindness to the reality of what the 2002 ceasefire agreement would entail. The lack of consultation and the total disregard to the views of the People of Sri Lanka depicted arrogance of those that hungered for personal glory. The lessons are that these very protagonists signatory to the agreement and those that praised it and spoke in favor of it are not suited to be entrusted with handling any matters related to Sri Lanka’s sovereignty and territorial integrity – ever. Unfortunately, some of these players continue to hold key portfolios and continue to maintain the same mentality and questions those that watch these officials once again attempt to dig Sri Lanka’s grave.

It was Kathy Stone writing to the Weekend Liberal in 2002 that exposed how LTTE would have used Charles Gnanakone to strike a deal with the UNF Government that led to the 2002 CFA. Incidentally, it was Gnanakone’s brother who smuggled shipments of weapons to the LTTE via our own customs.

It was Subramaniam Swamy who declared that the UNF Government of Ranil Wickremasinghe functioned according to a “Surrender Mentality” and when the entire show was being led by a Chief Negotiator and present FM we realize that same mentality prevails. The question is did the present Government win a war to succumb to surrender? The bargaining was what was missing on the side of SL at all times throughout the peace talks and this same policy is what the present FM continues to follow – why are the Sri Lankan leaders not reading between the lines of the dangers likely to result. GLP called his victory of negotiating the CFA deal with the LTTE a “road map for peace” – yes, he remains our FM.

It was Madam Maria Carrilho, Member of the EU Parliament and Head of Parliament Delegation for Relations with South Asia who went on to say that a new autonomous State will emerge as a result of the CFA and a flag and new anthem should also be given and the then PM’s secretary appears not to have even protested against it.

Let us first look at some key facts:

Signatories : GOSL and LTTE (Ranil Wickremasinghe and Prabakaran) Ranil signed agreement and handed it to Norways Ambassador John Westburg in Vavuniya, while Prabakaran signed in Kilinochchi.

Article 1: The Modalities of the Ceasefire Agreement

o   Forward defense locations – GOSL and LTTE can hold their ground positions maintaining separation of 600metres, movement possible but an absolute minimum distance of 400metres to be kept between them.

· GOSL and LTTE to provide information to the Sri Lanka Monitoring Mission (SLMM) regarding defense localities in all areas and SLMM will draw up demarcation lines.

· GOSL and LTTE cannot move munitions, explosives or military equipment into area controlled by the other Party.

· Tamil paramilitary groups to be disarmed by GOSL.

Article 4 : Entry into force, amendments and termination of the Agreement

The number of violations committed by the LTTE was well over 10,000 as many of these were not even tabulated. The LTTE violations included constructing new positions, firing weapons, moving military equipment, deploying weapons, carrying out offensive naval operations, illegally transporting arms and committing hostile acts against civilians which included intimidation and abductions of adults and children –  every clause of the agreement violated by the LTTE and not a hum from even Norway or SL Government that signed the agreement.

The very fact that those signatory agreed to place LTTE a terrorist organization in par with a democratic government itself is shameful and allowing LTTE free movement and the capacity to virtually redraw their boundaries only sums the fact that there is no better word to describe these protagonists of the ceasefire than “traitors”.