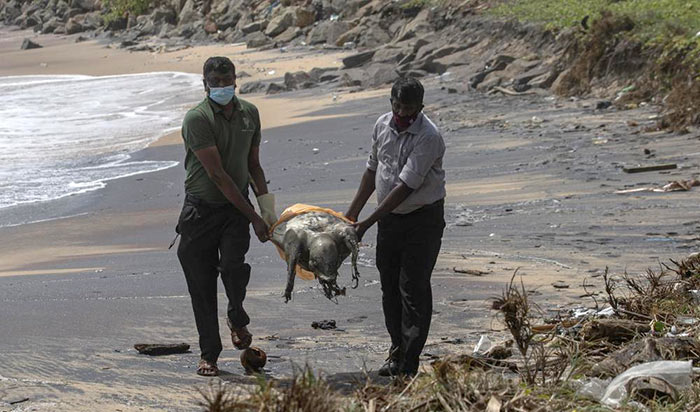 Tennakoon informed the Colombo Additional Magistrate, Lochani Abeywickrama that a 39-member expert committee had confirmed that the toxins released by the disaster had caused those deaths. Investigations by veterinarians had confirmed the committee’s opinion, Tennakoon said.

The Deputy Solicitor General said that the captain of the ship, the operator and the local agent of the vessel had tried to conceal the real situation as regards the fire on board the ship. “The investigators have taken into custody the mobile phones of the 25 crew members of the ship and are using the photos taken by them to draw a real time line of the events. Legal action will be taken against crew members if they try to conceal information and mislead Sri Lankan authorities,” Tennakoon said. The Deputy Solicitor General added that the government had no intention of welcoming a burning ship to receive compensation from ship owners.

Deputy Solicitor General said that the relavant authorities had taken all necessary steps to douse the fire. Sri Lankan officials were told on 19 May 2021 that all the cargo has been safely loaded. Thus, the fault lay with the shipping company that mislead the government, Tennakoon said.

(Source: The Island – By A.J.A Abeynayake)