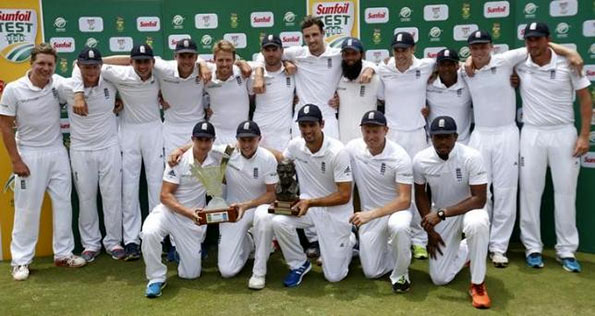 England have attempted a minor shake-up of the largely conventional world of test cricket by offering to use a points-based system to determine the winner of their home series against Sri Lanka.

Sri Lanka Cricket (SLC) secretary Mohan de Silva confirmed receiving the proposals covering the three tests, five one-dayers and a Twenty20 International set to be played between the teams from May 19 to July 5.

“We have received the proposals but we haven’t decided yet,” De Silva told Reuters by telephone.

“We’ll discuss it in our next board meeting and announce our decision in a week or two,” said the official, declining to elaborate, saying he had not gone though the details yet.

The England and Wales Cricket Board (ECB) introduced the points-based scoring for the women’s Ashes in 2013, awarding six points for every test victory, while two points were on offer for a one-day or Twenty20 International victory.

For the women’s Ashes last year, ECB and Cricket Australia (CA) decided test wins were worth four points, while a draw earned the teams two each.

The points-based system is aimed at injecting more excitement into the tour and add context to matches that otherwise maybe of merely academic interests.

The ECB, according to British media, might consider employing it for the subsequent home series against Pakistan and the points-based system has also piqued interest in Australia.

“We’ve noted the trial and we will see how it plays out before considering any changes to our current system, whether it be at home or in away series,” CA’s team performance manager Pat Howard was quoted as saying by www.espncricinfo.com.