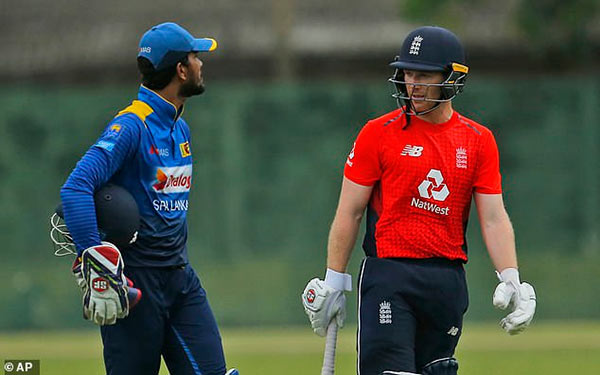 England were warned on Saturday to watch out for approaches by match-fixers as cricket’s governing body stepped up their investigation into ‘serious’ allegations of corruption in Sri Lanka.

The total wash-out of England’s second and final warm-up game ahead of Wednesday’s first one-day international shifted the focus here on to the presence of the International Cricket Council’s anti-corruption unit in Colombo.

Alex Marshall, general manager of the unit, is here to continue his investigation into what are understood to be historical allegations of wrongdoing within the Sri Lankan game. He met the England team on Saturday.

He told them to be extra-vigilant during the five-match 50-over series and the Twenty20 international and three Tests that follow on this two-month long tour as cricket continues its seemingly endless battle against dark forces.

But Marshall did emphasise that his inquiries do not concern a one-day series that will begin, the Sri Lankan climate permitting, in the rain forest area of Dambulla at the start of this country’s monsoon season.

‘We have provided a detailed briefing to the Sri Lankan president, prime minister and sports minister,’ said Marshall in an ICC statement.

‘I’d like to make it clear these investigations have been on-going for some time and do not relate to the series about to start in Sri Lanka.

‘However, I will take the opportunity to brief both teams in the coming days to ensure they remain alert to the risks from would-be corruptors.’

That briefing began with England at their Colombo hotel on Saturday while Marshall is expected to talk to the Sri Lankans when they gather in Dambulla. Match referee Richie Richardson will also be keeping a particularly close eye on a five-match series England will begin as firm favourites.

But that status was not helped on Saturday by heavy rain which left the P Sara Oval resembling a lake and restricted England’s unsatisfactory preparations to the single bad-light affected warm-up victory against a Sri Lankan XI on Friday.

This tour has been crammed into England’s increasingly overcrowded schedules by cricket’s greedy administrators, in their wisdom, at a time of year when the elements are bound to be a factor in Sri Lanka.

‘We know the rain will be around at certain points on this tour and that’s something we just have to get on with,’ said England’s Chris Woakes. ‘There will be games affected but you have to be mentally switched on.’

At least Woakes was able to bowl six overs in the heat and humidity of Colombo in Friday’s win which will at least give him a taste of what to expect when the No 1 ranked team in the world take on a home side that have been so dismal in one-day cricket they have crashed to No 8.

Even spinners found the conditions difficult to handle, with Moeen Ali feeling so exhausted after bowling 10 overs on the bounce that he retired to the dressing room for a nap at the conclusion of Sri Lanka’s innings.

Others have not been so lucky and England must now decide whether to stick with rookie Olly Stone in the first one-day international on Wednesday or replace him with a seamer in Sam or Tom Curran, or a third spinner in Liam Dawson.

‘A few of the boys did find it difficult in the first game but we haven’t been here a week yet and the longer we’re here the more we’ll adapt and find it easier,’ said Woakes.

‘As a seamer, you perhaps won’t bowl so much here and sometimes have to bowl tough overs when you’re containing to build pressure for the spinner at the other end.

‘You’re still picked as an opening bowler to take wickets but your mind-set does have to be different because sometimes it can be the best time to bat.’