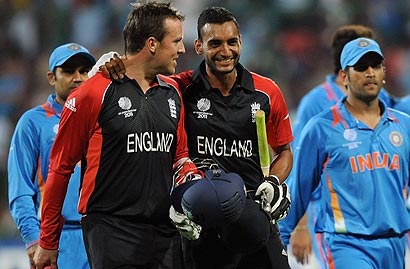 On an evening that simply beggared belief, England tied with India in an incredible finale in Bangalore. Andrew Strauss was England’s inspiration, producing an extraordinary 158 from 145 balls, the highest score by an English batsman in World Cup history, as England threatened the unthinkable, and set off in full pursuit of India’s seemingly unobtainable total of 338 – a score that had been made possible by a brilliant 120 from Sachin Tendulkar.

Such was the clarity of Strauss’s strokeplay and the passivity of India’s attack, at 280 for 2 in the 43rd over, England were cruising towards an extraordinary triumph. However a late intervention, sparked by a reverse-swinging Zaheer Khan, left them clawing for breath as a silenced Chinnaswamy stadium rediscovered its roar, and when the requirement shot up beyond two runs a ball, there seemed no way back into the contest. However, a ballsy volley of sixes from England’s lower order hauled them back from the brink, and with two runs needed from the final delivery of the match, Graeme Swann drilled Munaf Patel to cover to salvage a share of the spoils.

The breathless finale was entirely in keeping with a contest that twisted and turned like an insomniac in a mosquito-pit. From the first over of the match, in which Virender Sehwag might have been dismissed three times in five balls, through the sumptuous strokeplay of first Tendulkar and later Strauss, and on through a pair of batting collapses – one apiece for the lower order of both teams – there was scarcely a moment in which normal service was permitted. Tim Bresnan, with 5 for 48 in ten unrelentingly composed overs, was the unsung star of a day that deserves to be remembered as the finest World Cup contest since that semi-final in 1999.

For the first 39 overs of the match, and again for the last seven, the Bangalore crowd was as raucous as a monsoon wedding, as Tendulkar ignited India’s first home fixture of the World Cup with his 47th ODI century, before Zaheer Khan hauled them back from the brink of ignominy with 3 for 11 in his final three-over spell. But in between whiles, the game belonged to England, as India shipped their last seven wickets in 25 balls to let their opponents regain a toe-hold in the contest, before turning the stage over to Strauss and his magnum opus.

A positive start was a pre-requisite as England embarked on their second daunting chase in as many matches, and just as Strauss had soothed his team’s anxieties with 88 from 83 balls after their flirtation with humiliation against the Dutch, he was once again in the thick of things right from the start of the innings. Zaheer, who was as poor with the new ball as he was devastating with the old, bowled both sides of the wicket to gift two boundaries in six balls, and Strauss was up and running. He barely dipped below a run a ball at any subsequent stage of his innings.

He required some moments of luck, particularly on 17 when TV replays suggested he had nicked a drive against Zaheer that the Indian fielders were unable to hear against the din of the crowd, but for the most part he was rewarded for his intent and aggression, and a common-sense approach to the three key partnerships that propelled England’s challenge. By the end of the batting Powerplay, England were 19 runs to the good, on 77 for 1 compared to India’s 10-over total of 58 for 1, and with a stream of easy singles to offset the intermittent boundary balls, they never looked like blinking until the summit was within sight.

At the top of the order, Kevin Pietersen’s stay was short, sharp and effective. He pounded four fours in eight Zaheer deliveries to rush along to 31 from 22 balls, before dumping Munaf on his backside with a brutally struck drive, only for the ball he had parried from in front of his face to plop into his right hand as he glanced up to regain his bearings. Trott proved an able ally in a 43-run stand for the second wicket before Chawla hurried one through to strike his back pad, whereupon Bell arrived to embark on what should have been the game’s decisive stand – a 170-run partnership that spanned 27 overs.

Bell, England’s best player of spin, was beaten twice in his first two balls as Chawla ripped first his googly then his legspinner to perfection, but his hairiest moment came on 17, when Yuvraj Singh referred an appeal for lbw that Hawkeye suggested met all the criteria for an overturned decision. However, umpire Billy Bowden, applying the letter of the law even if it meant contravening the evidence on a billion TV screens, reprieved Bell on the grounds that he had advanced more than 2.5 metres down the pitch, and that the technology’s prediction could not be deemed conclusive.

The despondency of the crowd was reflected in India’s subsequent bowling, as Strauss motored through to his sixth ODI century, from 99 balls, and on towards his third in excess of 150. Liberated by the match situation, he launched Yuvraj for one of the biggest sixes of his career, straight down the ground, to bring up the hundred partnership, and Bell did likewise to Chawla to rush through to his fifty from 45 balls.

It was England’s decision to take the batting Powerplay, at 280 for 2 in the 43rd over, that triggered the devastating late reversal of momentum. India’s last chance appeared to have gone begging when Bell, on 68, was dropped by Virat Kohli at slip off Chawla, but Kohli made amends 10 balls later, when Bell miscued a tired slog off Zaheer to extra cover. With the crowd alive to the contest once again, Zaheer then put himself on a hat-trick with an unplayable late-swinging yorker that crushed Strauss’s toe in front of leg stump.

With the pressure proving smothering and Chawla’s variations now illegible to the new batsmen, Paul Collingwood missed a wipe across the line to be bowled for 1 from five balls, before Prior gave up all hope of threading the gaps and took a huge top-edged heave at Harbhajan to be caught for 4 from 8. Michael Yardy chipped and chivvied before dinking an attempted boundary shot straight to Sehwag at short backward square, but it was Swann’s flat six off Chawla, with 29 needed from two overs, that reawakened England’s challenge. Three balls later, Bresnan also put Chawla into the stands, and though he was bowled having a mow in the same over, Ajmal Shahzad sent his first ball, from Patel, in the same direction, to set up the grandstand finish.

If England felt that they’d let a golden opportunity go, then at least it could be said that they proved themselves equal to one of the best performances of a legendary career. Even by Tendulkar’s matchless standards, his was a vintage performance, and a masterful example of how to pace an innings. He was a casual bystander in the day’s opening exchanges, while Sehwag ran amok, before picking up his tempo throughout a second-wicket stand of 134 with Gautam Gambhir, without ever needing to take risks to make his mark. The high point of his innings came when he belted consecutive sixes at the start of Swann’s second spell, a calculated show of class that undermined England’s trump bowler, and left Strauss floundering for alternatives as his tactics were picked apart.

In all Tendulkar stroked 10 fours and five sixes in what was, somewhat curiously, his first one-day hundred against England for nine years. By the time he was dismissed with 11 overs of the innings remaining, caught off a leading edge at cover (to give James Anderson his first one-day wicket in India for 53 overs dating back to 2006, on a day in which he conceded the most expensive analysis in England’s World Cup history), India’s total stood at an imposing 236 for 3, and it was a measure both of Tendulkar’s brilliance and of England’s dogged refusal to give in, that Yuvraj and MS Dhoni were unable to cut loose to quite the extent they might have expected.

The omens for England had not been exactly positive going into the start of this match. Eleven defeats in their last 12 away matches against India underlined their status of underdogs, as did the two team’s respective performances in their opening fixtures of the tournament – England’s laboured victory over the Netherlands compared distinctly unfavourably to India’s crunching win against Bangladesh in Dhaka, and when Stuart Broad, their best and most aggressive seamer, was ruled out with a stomach complaint before the start of the match, a vast swathe of England’s gameplan went down with him. Nevertheless, they thought on their feet and showed precisely the pluck that was in stasis throughout their one-day campaign in Australia. Two of the best teams in the world were on show in Bangalore, and what a show they produced.