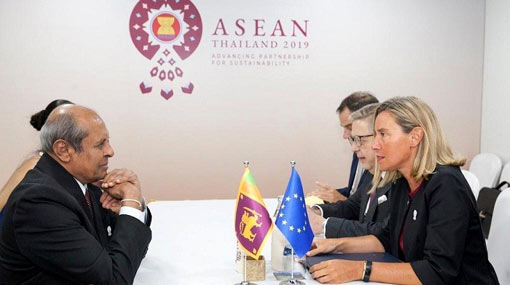 High Representative of the European Union for Foreign Affairs and Security Policy/Vice-President of the European Commission, Federica Mogherini has stressed solidarity with Sri Lanka following the Easter Sunday attacks.

She has underlined the EU’s readiness to support Sri Lanka in the face of this challenge to help prevent and counter violent extremism and support improvements in coordinating the country’s counterterrorism efforts.

Minister Marapana, addressing the 26th ARF session, has stressed the necessity for concerted global efforts to counter traditional and non-traditional security concerns including terrorism, violent extremism and cybercrime. In this context, Minister Marapana underscored the need for a deepened resolve among the ARF participants to overcome these challenges.

The 26th ARF session focused on expanding confidence-building measures and enhancing cooperation in areas such as the anti-terrorism effort, strengthening the nuclear non-proliferation regime, preventive diplomacy, countering violent extremism, promoting women, peace and security and ensuring the secure use of information and communication technologies.

Further, the Meeting condemned multifaceted acts of terrorism including the Easter Sunday attacks in Sri Lanka and the recent acts of violence in New Zealand and the Philippines.

In order to counter the menace of terrorism, the Meeting underlined the need to address its root cause and to develop a holistic approach in enhancing collaborations among the ARF participants in this endeavour. The Ministers also discussed and exchanged views on matters relating to regional and international issues of common interests.

While in attendance at the Forum, Minister Marapana conducted bilateral meetings with Minister of Foreign Affairs of Bangladesh, A. K. Abdul Momen, Minister of External Affairs of India, S. Jaishankar, Deputy Prime Minister and Minister of Foreign Affairs of New Zealand, Winston Peters and High Representative of the European Union for Foreign Affairs and Security Policy and Vice President of the European Commission, Frederica Mogherini on the side-lines of the 26th ASEAN Regional Forum. These meetings provided the opportunity to discuss the most pertinent and current bilateral issues and paved the way to further consolidate the existing relations with these countries.

Established in 1994, ARF comprises of 27 Member countries. It is an important platform for security dialogue in the Indo-Pacific, which provides a setting, in which members can discuss current security issues and develop cooperative measures to enhance peace and security in the region. Sri Lanka is a participant country of ARF, joining the Forum in the year 2007.

In view of the increasing importance of engaging with the ASEAN region, Sri Lanka aspires to become a Sectoral Dialogue Partner in the ASEAN and necessary measures have been taken by the Ministry of Foreign Affairs to this end.