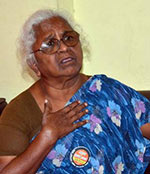 Perarivalan’s mother confident that justice will be done

After the executions of Ajmal Kasab and Afzal Guru were carried out in secrecy, 66-year-old Arputhammal says every dawn scares her. She reiterates that her son A.G. Perarivalan is innocent and hopes that justice will be rendered. Perarivalan has been sentenced to death along with Murugan and Santhan in the Rajiv Gandhi assassination case.

“It worries me when people raise questions on the fate of convicts in the Rajiv Gandhi case. The case of my son cannot be compared with that of Ajmal Kasab or Afzal Guru. Perarivalan has spent 22 years in prison. There was uncertainty on the fate of his mercy petition for over a decade. The state should not use the law to kill an innocent man,” she said.

The execution of the three death row convicts has been stayed by the Supreme Court, which is hearing their petitions on the inordinate delay of over 11 years in the rejection of their mercy petitions by the President.

Ms. Arputhammal appealed to the Supreme Court and the Union government that in the event of the petition being dismissed, the government should communicate to her its course of action well in advance.

“Advocates tell me that appeal options still exist … We will appeal to the President to review his predecessor’s order of rejection. There are several loopholes in this case. A book written by a senior investigator in the Special Investigation Team points to certain flaws.”

After Kasab’s execution, Ms. Arputhammal met her son, who is lodged in the Vellore central prison. “It pains me so much to see him… Only a mother can understand my agony. People are talking of the noose tightening around convicts in the Rajiv Gandhi case. But my son is confident… He told me that truth will prevail and justice done. My husband is 72 years old and we want our son to be with us in our old age,” she said.

Appealing to the Supreme Court to take suo motu cognisance of her appeal that no drastic action be taken in the event of the petition getting dismissed in the apex court, she said the family was pinning hopes on Tamil Nadu Chief Minister Jayalalithaa, who got a resolution passed in the Assembly urging the Centre to commute the death sentence awarded to the three convicts to life.

“This is the land of Mahatma Gandhi and Buddha. An innocent man should not be executed by the state. Both Justice K.T. Thomas and lead investigator D.R. Kaarthikeyan have spoken out against carrying out the death penalty. My son has topped the Plus Two examination in prison and he has reformed many others by involving them in education, sports and cultural activities,” she added. (Source: The Hindu)