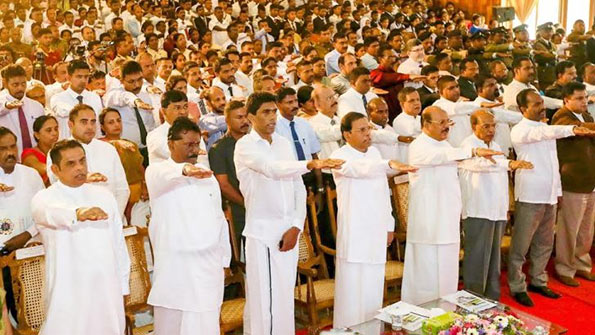 President Maithripala Sirisena says the example is better than the advice in the program to build a drug free country.

“Everybody should be committed to fulfill their responsibility, according to their self-conscience”, he said.
The President was speaking at the 6th phase of the National Program for Drug Free Country, held today (June 26) at the New Tow Hall in Nuwara Eliya.

The President pointed out that strong reason for the high levels of poverty and the malnourishment among the people in the Nuwara Eliya District, is the drug addiction of the males as well as females in the areas. “Few comprehensive programs will be implemented next couple of months to educate the people about that.

The national program has been organized by the Presidential Task force on Drug Prevention, in connection with the District Secretariat of Nuwara Eliya.

The President unveiled the plaque which educates people about the prevention of drug.

The report on the National Drug Prevention Program of the Nuwara Eliya District was presented to the President by District Secretary of Nuwara Eliya Mrs. K. H. A. Meegasmulla.

Pinning of official batches on five school children who committed for drug prevention, presenting of awards to the officers of Police Department and Civil Security Department, as well as to a provincial journalist who were dedicated for the prevention of drug, was done by the President

A school child P. Stephanie presented a drawing by her to the President at this occasion.

Minister P. Digambaram, Chief Minister of the Central Province Sarath Ekanayake, Member of Parliament Muththu Sivalingam, Senior Additional Secretary to the President Rohana Keerthi Dissanayake and the Director of the Presidential Task Force for Drug Prevention Dr. Samantha Kithalawarachchi were among those participated in this occasion.