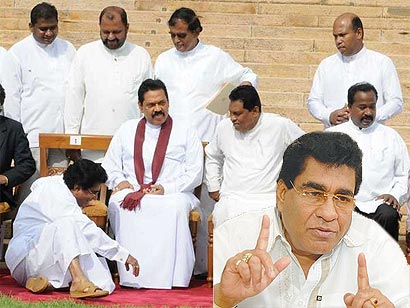 The disciplinary committee appointed by the Sri Lanka Freedom Party (SLFP) to probe the incident of a Samurdhi officer being tied to a tree at Kelaniya, has decided that former Deputy Minister Mervin Silva is not guilty.

The three-member committee which handed over its report to President Mahinda Rajapaksa has stated that there was no evidence against former Deputy Highways Minister Mervin Silva to prove that he was responsible for punishing the Samurdhi official to a tree for failing to be present during an anti-dengue campaign.

Considering the available evidence the disciplinary committee has decided that Mervin Silva is not guilty of breaching any party discipline, Health Minister Maithripala Sirisena who is also the SLFP General Secretary told Ada Derana a short while ago.