Famous Iranamadu Tank to be One Fresh Water Fishing Hub 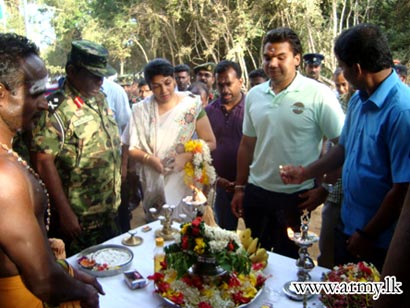 Iranamadu reservoir in Kilinochchi, the largest inland lake in the Northern Province is set to be one of the fresh water fishing hubs soon with the distribution of 50 fishing canoes among resettled civilians in the area.

Under the ongoing ‘Uthuru Wasanthaya’ (Northern Spring) development programme, those fishing canoes were given away during a brief ceremony by both Hon. Namal Rajapaksa, Member of Parliament and Hon. Mahindananda Aluthgamage, Minister of Sports. As canoes were launched into the lake, Hindu priests invoked blessings on them.

Those fifty canoes to be used for fishing in the famous Iranamadu tank enable a fair number of resettled civilians in the area to make a living and uplift their livelihood while raising their income levels.