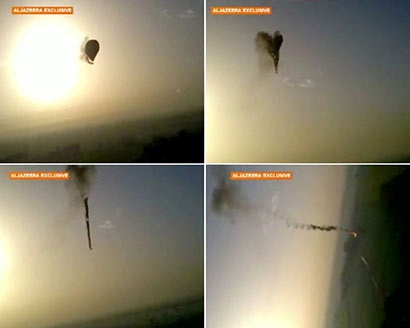 LUXOR, Egypt (AP) — The terror lasted less than two minutes: Smoke poured from a hot air balloon carrying sightseers on a sunrise flight over the ancient city of Luxor, it burst in a flash of flame and then plummeted about 1,000 feet to earth. A farmer watched helplessly as tourists trying to escape the blazing gondola leaped to their deaths.

Nineteen people were killed Tuesday in what appeared to be the deadliest hot air ballooning accident on record. A British tourist and the Egyptian pilot, who was badly burned, were the sole survivors.

The tragedy raised worries of another blow to the nation’s vital tourism industry, decimated by two years of unrest since the 2011 revolution that toppled autocrat Hosni Mubarak. The southern city of Luxor has been hit hard, with vacant hotel rooms and empty cruise ships.

It also prompted accusations that authorities have let safety standards decline amid the political turmoil and infighting, although civil aviation officials said the balloon had been inspected recently and that the pilot may have been to blame, jumping out rather than stopping the fire.

The balloon was carrying 20 tourists — from France, Britain, Belgium, Japan and Hong Kong — and an Egyptian pilot on a flight over Luxor, 510 kilometers (320 miles) south of Cairo, officials said. The flights provide spectacular views of the ancient Karnak and Luxor temples and the Valley of the Kings, the burial ground of Tutankhamun and other pharaohs.

According to initial indications, the balloon was in the process of landing after 7 a.m. when a cable got caught around a helium tube and a fire erupted, according to an investigator with the state prosecutor’s office.

The balloon then ascended rapidly, the investigator said. The fire detonated a gas canister and the balloon plunged about 300 meters (1,000 feet) to the ground, crashing in a sugar cane field outside al-Dhabaa village just west of Luxor, a security official said.

Both the investigator and the security official spoke on condition of anonymity because they were not authorized to talk to the media.

“I saw tourists catching fire and they were jumping from the balloon,” said Hassan Abdel-Rasoul, a farmer in al-Dhabaa. “They were trying to flee the fire but it was on their bodies.”

One of those on fire was a visibly pregnant woman, he said.

Smoke is seen rising for several seconds from the gondola, silhouetted against the risen sun. The balloon itself catches fire with a flash, and in an instant, it bursts and falls as a fireball to the ground, trailing smoke. Egyptians on the balloon filming the scene can be heard crying and gasping in horror at the sight.

The bodies of the tourists were scattered across the field around the remnants of the balloon, as rescue officials collected the remains.

The crash immediately killed 18, according to Luxor Gov. Ezzat Saad. Two Britons and the pilot were taken to a hospital, but one of the Britons died of his injuries soon after.

Among the dead were nine tourists from Hong Kong, four Japanese, two French, a Belgian and a second Briton, according to Egyptian officials, although there were conflicting reports on the nationality of the 19th victim.

In Tokyo, Japan’s Ministry of Foreign Affairs said the Japanese victims were two couples in their 60s from Tokyo, but declined to give their names.

The toll surpasses what was believed by ballooning experts to be the deadliest accident in the sport’s 200-year history: In 1989, 13 people were killed when their hot air balloon collided with another over the Australian outback near the town of Alice Springs.

After the 2009 accident, Egypt suspended hot air balloon flights for several months and tightened safety standards. Pilots were given more training, and a landing spot was designated for the balloons.

The head of the Civil Aviation Administration, Mohammed Sherif, told The Associated Press at the scene of the crash that the pilot had just renewed his license in January.

“Each time we renew the license, we check up the balloon and we test the pilot,” Sherif said.

An aviation official, speaking on condition of anonymity because he wasn’t authorized to talk to reporters, blamed the pilot, saying initial results of the investigation showed he jumped out when the fire began, instead of shutting off valves that would have prevented the gas canister from exploding.

But the crash raised accusations that standards have fallen. Mohammed Osman, head of the Luxor’s Tourism Chamber, blamed civil aviation authorities, who are in charge of licensing and inspecting balloons, accusing them of negligence.

“I don’t want to blame the revolution for everything, but the laxness started with the revolution,” he said. “These people are not doing their job, they are not checking the balloons and they just issue the licenses without inspection.”

The Civil Aviation Ministry, like much of the government administration, has seen political disputes since President Mohammed Morsi came to power in June as Egypt’s first freely elected leader.

The ministry was long dominated by military officers or former officers, some of whom have resented control by a civilian president, particularly one from the Muslim Brotherhood. In other ministries, observers say Brotherhood members have been appointed, or included as volunteers, in many posts.

One civil aviation ministry official told the AP that standards have fallen since civilians were brought in to some middle-ranking positions. The official said inspections have become more lax, taking place once a month instead of weekly. The official spoke on condition of anonymity in order to talk about the industry.

The crash added to the woes for residents of Luxor. Scared off by the turmoil and tenuous security following the uprising, the number of tourists coming to Egypt fell to 9.8 million in 2011 from 14.7 million the year before, and revenues plunged 30 percent to $8.8 billion. Last year saw a slight rise, but most tourists go to the beach resorts of the Red Sea, staying away from Nile Valley sites like Luxor.

That has been devastating for the local economy, with some government estimates saying that 75 percent of the labor force is connected to tourism. Luxor’s hotels are about 25 percent full in what is supposed to be the peak of the winter season.

Poverty swelled at the country’s fastest rate in Luxor. In 2011, 39 percent of its population lived on less than $1 a day, compared with 18 percent in 2009, according to government figures.

Mohammed Haggag, owner of Viking, a company that runs seven balloons in Luxor, said the flight shutdown meant that the whole industry was suffering for one pilot’s mistake.

“Why the mass punishment? Do you stop all flights when you have a plane crash?” he said. “You will cut the livelihoods for nearly 3,000 human beings who live on this kind of tourism.”

Khaled Wanis, the owner of a shop selling tourist trinkets near Luxor Temple, said the past two years have been the worst he has ever seen.

“I can spend a week or 10 days before a customer knocks my door,” he said. “Since I heard the news today, I felt ache in my heart.

“The general feeling is that Egypt is hard to visit and this is not a safe place to visit. The accident will only add to this feeling,” Wanis said. “We are begging for tourists. Now, they get killed, so what do you expect?” (AP) 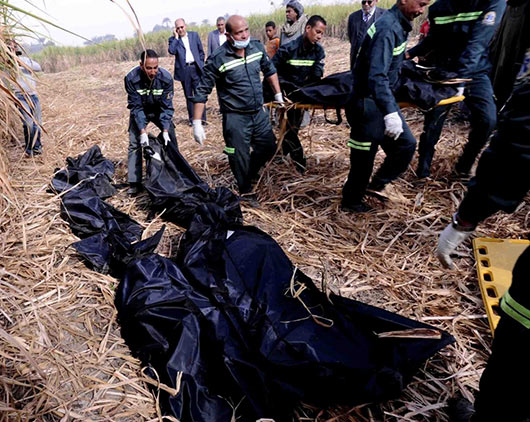