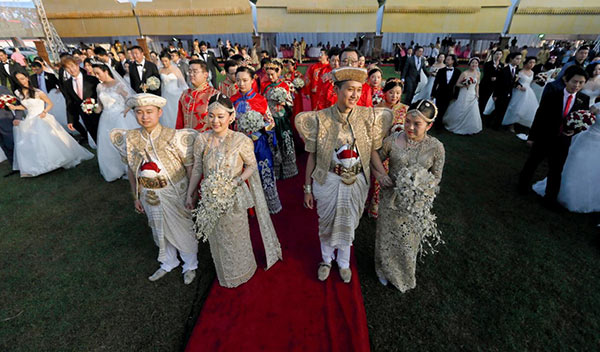 Fifty couples from China tied the knot in the Sri Lankan capital on Sunday in a mass wedding ceremony, conducted in the island’s Buddhist traditions, as the island aims to woo more tourists.

Some were dressed in the traditional attire of Sri Lanka’s mountainous central region while others wore Chinese or Western clothes at the main ceremony in the central Colombo area.

“There’ll be many more couples who want to come here and celebrate true marriages from China and other parts of the world,” Tourism Minister John Amaratunga told Reuters.

“It’ll be an opening to say Sri Lanka is the best destination for foreigners.”

Chinese tourist arrivals in Sri Lanka have been rising and now account for around 13 percent of the two million tourists a year who visit the country, second only to the number of Indian visitors, official data show.

Tourism accounts for around 5 percent of gross domestic product and arrivals this year have already reached about 2.3 million.

China is pouring hundreds of millions of dollars into Sri Lanka for major infrastructure projects and Colombo is one of the major partners in Beijing’s “One Belt One Road” project.

“This is a beautiful country. We love the traditional ceremony,” bridegroom Wei Ying Nang, 28, told Reuters after the wedding, standing beside his wife, who was dressed in a white wedding frock while he wore a suit.

Alice Wu, dressed in a golden sari from Sri Lanka’s mountainous region, said she was interested in the culture since she studied traditional Kandyan dancing in Sri Lanka three years ago.