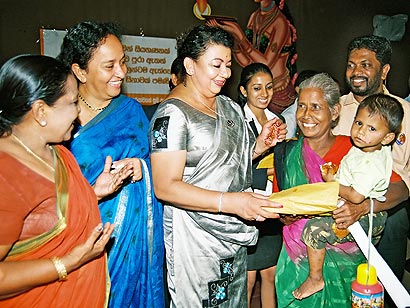 Shiranthi Rajapaksa, wife of President Mahinda Rajapaksa arrived on a sudden visit to Jaffna on Monday 11th January to participate at a meeting organised by ‘The Women’s Association that Serves the Country’. She was accompanied by Sri Lanka Freedom Party (SLFP) organiser for Jaffna and Vanni districts Thilak Kumara Udugama.

Hundreds of members of the women’s organisations, government officials and professionals in the Jaffna peninsula and local women in Jaffna had been invited to attend the meeting at Veerasingham Hall. She met lots of women and talked to them in a free and friendly manor about their problems and promised to address those matters soon. At the same time she requested the gathering to support her husband’s re-election bid as the next President in the forthcoming elections.

First Lady was warmly welcomed by women in the north of Sri Lanka. She received blessings from Hindu priest and also made a courtesy call to Bishop of Jaffna during her short visit. She arrived at Pallali Air Port and taken to Veerasingham Hall in Jaffna town under heavy security. First Lady is seen here with the members of the organising committee and receiving blessings from a Hindu priest.