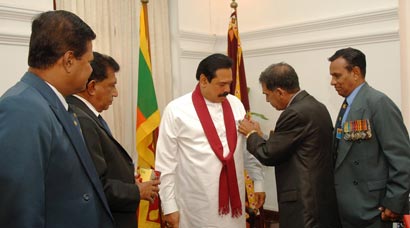 The first poppy flower was pinned on President Mahinda Rajapaksa Tuesday on 27 September at Temple Trees in view of World Poppy Day or Remembrance Day which falls on November 14.

The Poppy month held in memory of gallant heroes who sacrificed their lives since World War I, is to commence on the 11th of October and the national celebrations of the Poppy day will be held on the 14th of November at the Viharamaha Devi Park, Colombo. The Poppy Day is observed internationally on second Sunday of November in Commonwealth countries since 1921.

In Sri Lanka, Ex-Servicemen Association organises the sale of poppy flowers every year. The proceeds from the sales will be utilized for the benefit of the war heroes who served since the World War I who are now retired or disabled during their service. Those funds are also used to welfare of the families of war veterans.

The President of the Ex-servicemen Association Naval Captain, Patrick Jayasingha pinned the first flower on President Rajapaksa to mark the occasion.

Seen here is President Rajapaksa receiving the first poppy flower from the President of the Association at Temple Trees. 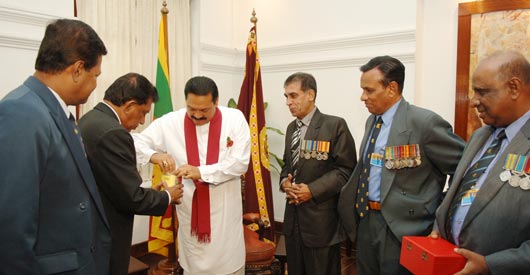