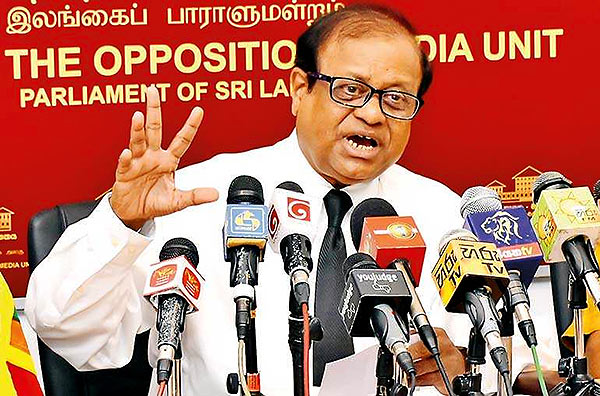 Presenting a new twist to the ongoing tug-of-war between the Sri Lanka Freedom Party (SLFP) and the Sri Lanka Podujana Peramuna (SLPP) on which symbol their proposed coalition would contest under, Opposition MP Susil Premajayantha yesterday said they would not oppose using a neutral symbol for General Election but their stance on the flower bud will not be changed for the Presidential Election.

The SLFP on Tuesday called for a neutral symbol for the proposed coalition but the SLPP said on the same day that it would not change its stance on the flower bud symbol under any circumstances.

Speaking to media at the Opposition Leader’s Office, Premajayantha said the main focus should be the Presidential Election and the candidate and his policies would be the crucial factor, not the symbol.

According to Premajayantha, the SLPP has agreed to contest the General Election under a neutral symbol but it had informed the SLFP they it would not change its stance on the symbol during the Presidential Election.

He noted the SLPP had agreed with the SLFP over policies and the basic policy framework had been finalised. He argued the SLPP had been flexible on terms and policies proposed by the SLFP during coalition talks and therefore the SLFP should be willing to compromise on the symbol in the Presidential Election.

“We request the SLFP not to get hung up on the symbol and come to a decision to finalise the proposed coalition. There is no point of dragging these talks over something as trivial as a symbol. If we want to win, we have to work collectively.”

Pointing out that the general secretary of a political party has more responsibility during coalition talks, he argued SLFP General Secretary MP Dayasiri Jayasekara should take the lead to push his party to agree on the proposed coalition.

“During the 2015 General Election I was the United People’s Freedom Alliance (UPFA) General Secretary. I had very limited time to get President Maithripala Sirisena and Opposition Leader Mahinda Rajapaksa together. Therefore I believe the final decision should be taken soon and the Party’s General Secretary has a larger responsibility to push leaders to take a final decision soon.”

He claimed the SLFP members at grass root level had pledged support for the SLPP and a considerable numbers of SLFP members had obtained SLPP membership. According to Premajayantha, the SLPP is in an advantageous position to win the Presidential Election.

3 Responses to Flower bud only for Presidential Election: SLPP