Fonseka does not oppose request for presidential pardon 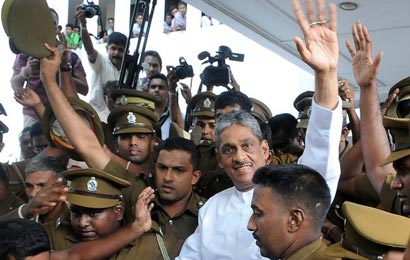 Imprisoned former Army chief Sarath Fonseka will not oppose if there is a request for a presidential pardon for him, UNP general secretary Tissa Attanayake said.

The ex-commander has told Mr. Attanayake, however, that neither he nor anyone in his family would make such a request.

The UNP general secretary was speaking to the media after visiting Mr. Fonseka at Welikada Prison.

He said the opposition leader would submit next month a request for a presidential pardon through Ven. Galaboda Gnanissara Thera.

2 Responses to Fonseka does not oppose request for presidential pardon