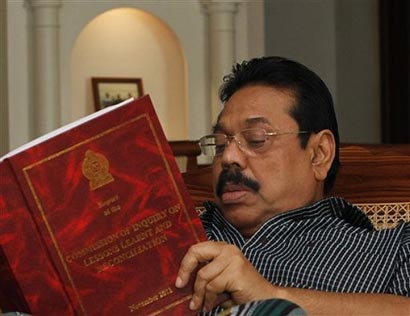 The Lessons Learnt and Reconcilliation Commission (LLRC) in its final report to the President which was tabled in Parliament last Friday criticised the role of Norway, that their actions contributed significantly to breakdown of the CFA.

It observed that the Nordic peace makers’ dual role as the facilitator and the monitor of the peace process did not synchronise well and this decision to play two opposing roles led to a conflict of interest and failed strong action by the Sri Lanka Monitoring Mission (SLMM) in instances of grave violations of the CFA, particularly by the LTTE.

“The Commission is of the view that Norway failed to effectively monitor compliance with the CFA on the basis that by such action its neutral role as the facilitator will be compromised. ”

The members of the LLRC, after their over one and a half year sittings concluded the breakdown of the CFA was mainly due to the the ‘disinclination of the LTTE to terminate conflict’ and enter the political process to find a lasting solution and the Norway’s conflicting dual role, too, contributed to this significantly.

It observed ‘the LTTE was totally disinterested in a negotiated settlement short of a separate state and the peace process was a way of buying time to strengthen itself militarily for the next battle.’

The Commission blamed Norway and the then Government for not reading the LTTE properly. It said the CFA which categorised the country into two distinct areas helped the apparent legitimization of the territorial claims of the LTTE.

The members of the Lessons Learnt and Reconciliation Commission were required to inquire into the matters or events that led to the breakdown of the 2002 CFA and the sequence of events that followed thereafter, in order to learn from the past experiences to avoid a repetition of the past.

The report also criticised that Norway had handed the Government a compromised text with the LTTE as a draft CFA, with a take it or leave it approach, violating established principles of such a process in order to keep the LTTE in the negotiating process.

The Commission called the 2002 CFA a ‘largely unworkable and unrealistic goal and it failed to provide a platform for sustainable peace in the longer term’ apart from a short lived respite for a nation battered by terrorism for decades. However on a positive note the Commissioners observed the CFA that kept the LTTE at the negotiating table for a considerable period, may have acted as a catalyst in the disintegration of the LTTE and the breakaway of the Karuna faction.