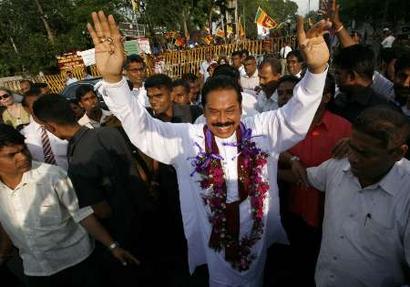 President Mahinda Rajapaksa has been declared the winner of Sri Lanka’s presidential poll but the outcome was immediately rejected by his challenger. Gen Sarath Fonseka promised a legal challenge to the outcome of the ballot, the first since Tamil Tiger rebels were defeated after 25 years of civil war.

The Elections Commission declared Mr Rajapaksa the victor with 57.8% of votes cast, to 40% for his main rival. Troops earlier surrounded the Colombo hotel where Gen Fonseka is staying. A government spokesman told the BBC it did not intend to hold Gen Fonseka but were looking for army deserters.

A military spokesman said the troops’ deployment was a “protective measure”.

The BBC’s Anbarasan Ethirajan, who is in the same hotel as Gen Fonseka and other opposition leaders, says the troops’ presence has created a very tense atmosphere.

An opposition spokesman, Rauf Hakeem, said opposition members had appealed to the government over what he said were “high-handed tactics” intended to intimidate them.

He told reporters there were no deserters inside the hotel.

Gen Fonseka has alleged vote-rigging and has lodged several objections with Sri Lanka’s electoral commission. He has also accused the government of wanting to kill him and said it had removed his personal security from the hotel, leaving him vulnerable.

“There is no democracy here. The government is behaving like murderers, not taking responsibility for security of the people,” Gen Fonseka said at a press conference.

“I have sacrificed a lot, I have continued to bring victory of the war to this country. And therefore I have the threat from the terrorists.

“So now they are exposing me without any security. They are hoping that they will do something to me and put the blame on the terrorists,” he said.

One of the reasons behind Gen Fonseka’s challenge to the election outcome may be that he fears for his own safety in Sri Lanka now he has lost, the BBC’s Charles Haviland in Colombo says.

Defence Minister Gotabaya Rajapaksa, the brother of the president-elect, has previously expressed concern about Gen Fonseka’s allegations that at the end of the war he ordered surrendering Tamil Tiger rebels to be shot. Gotabaya Rajapaksa has denied the claims.

Since he left the army the higher ranks have very much rallied behind Mr Rajapaksa, our correspondent adds. Gen Fonseka also does not have his own party base, having stood for election backed by a disparate group of opposition parties.

Independent election observers have been perturbed by two main elements, our correspondent says, one of which is the amount of violence in the run-up to the election – with most complaints about the perpetration of violence laid at the door of the president’s side.

The other is what monitors say is the misuse of public resources and state media, particularly state-run TV, which provided blanket coverage of the incumbent president’s campaign.

Some 70% of Sri Lanka’s 14 million-strong electorate turned out to vote. However, turn-out in the Tamil areas in the north-east, where the fiercest fighting occurred during the conflict, was less than 30%.

Lucien Rajakarunanayake, a spokesman for Mr Rajapaksa, told the Associated Press news agency that the president had “won a historic and resounding victory in the first free and fair elections held throughout the country since the defeat of terrorism”.

Supporters of Mr Rajapaksa celebrated in the streets of Colombo, waving Sri Lankan flags and setting off fireworks.

After a violent and acrimonious campaign, during which four people died and hundreds were wounded, Tuesday’s election was largely peaceful.

But there were serious exceptions, especially in the Tamil-populated north.

In the city of Jaffna, the private Centre for Monitoring Election Violence said there were at least six explosions before and just after voting began.

Later there were two blasts in Vavuniya, the town near the huge camps for people displaced by the war. The organisation said it feared this was a systematic attempt to scare people away from voting.

There were also grenade attacks in the Sinhala-dominated centre and south.

It later turned out that Gen Fonseka had not been able to vote because his name was not on the register.

The two men were closely associated with the defeat of the Tamil Tigers last May but fell out soon afterwards. Gen Fonseka quit the military, complaining that he had been sidelined after the war.

The president’s side accuses the general of courting separatists. The general has accused the president of plotting vote-rigging and violence, something his rival denies.

However, economists say this will make it hard for the country to meet cost-cutting obligations imposed under the terms of a $2.6bn (£1.6bn) International Monetary Fund loan.