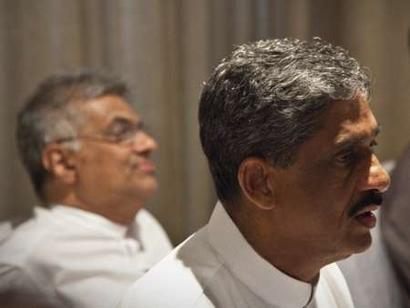 Excerpts of a letter by Gen Sarath Fonseka to Sri Lanka’s Elections Commission, following his defeat in the presidential poll. The letter has been translated from Sinhala.

“Dear commissioner of elections. Before and after handing over the nomination papers, President Rajapaksa’s election campaign has made great use of state resources.

Further, there have been threats, intimidation and accusations levelled against me. Many of my supporters were intimidated.

The government engaged in a campaign abusing state media and state resources to accuse me of being a foreign agent and a traitor.

Further, 10 security force personnel provided to me as a result of serious threats to my life were withdrawn.

They were allowed to stay until after the election after your intervention. However, after the results were announced, this morning they were called back to the army police unit.

When they left to report at the army police, under the orders of the head of the army police unit, they were arrested in front of the hotel I am staying in, handcuffed and ordered to kneel down on the street.

I have also received information that the government is planning to arrest me.

The army personnel who are stationed in front of the hotel also tried a few times to forcefully enter the hotel.