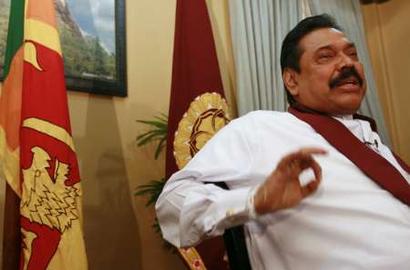 President Mahinda Rajapaksa today called on all Sri Lankans to join hands with him to build the country. Talking to reporters at the Election Commission shortly after he was formally declared winner in the sixth presidential election, Mr Rajapaksa said it was now clear that the people of Sri Lanka were all equal and that he was now the President of the whole of Sri Lanka including those that had not voted for him.

The President called elections two years ahead of his first term because he got elected in November 2005 mainly on Sinhala vote and he wanted to give the Tamils a chance to vote, now that the LTTE which forced them to boycott the last election, was no more.

He said” I will be President for the nation, for those who have voted for me as well as for those who voted against me. I nvite everyone to join hands with me to work for the good of the nation.

IN sharp contrast to the President’s conciliatory approach, his main challenger and retired army commanderSarath Fonseka cried foul and called on the Election Commission to annul the polls.

Talking to reporters, he said he had sent a letter to Elections Commissioner Dayananda Dissanayaka, giving reasons why the poll should be annuled.

Gen Sarath Fonseka said he would take legal action to get the polls annulled. Among the concerns raised by the General was the inability for some internally displaced people in the north to cast their vote, the alleged misuse of state property and allegations raised against him by the State media.

He also said that he has contacted foreign missions in Colombo over the situation which had developed outside the hotel he is staying with troops surrounding the area.

8 Responses to Join hands with me, says President Mahinda Rajapaksha