‘For the wrong acts of previous Govt. we are blamed for deforestation’ – President 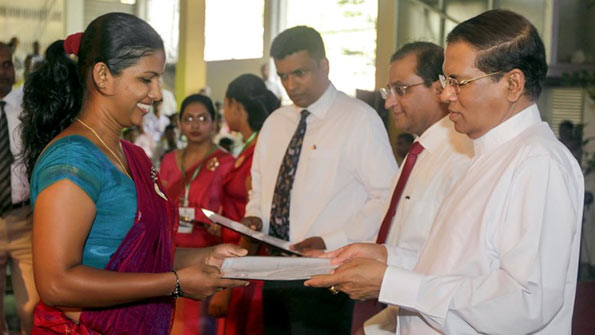 When there is a possibility to provide lands from other places for the purpose of resettlement without doing the deforestation, taking narrow decisions the previous government damaged the Wilpattu National Park and today, some section of our society allegedly blames for the present government in this regard, President Maithripala Sirisena said.

He made these observations participating in a ceremony to present appointment letters to 290 Forest Field Assistants held at the Ape Gama premises in Battaramulla, today (4).

The President said that his government will take stern actions to protect the natural resources including the forests.

He further said that as the Minster of Mahaweli Development and Environment ha has planned a three-year national strategy to protect the environment including the forest resource.

Everyone should be committed to fulfill their responsibilities towards protecting Earth’s biodiversity , the President said that adding the new government is working with a plan to increase the country’s forest cover from its existing 29 per cent to 32%.

The President also said that he will take steps to ban the tobacco cultivation fully in the country in 2020 and said that the policy of the present government is to choose only good quality productions for the people’s health and eliminate everything which pose a threat to the health of the public.

The Laws will be strictly imposed against the persons who break the rules on polythene ban, which is effective from 1st of January, 2016, he added.

Secretary Ministry of Ministry of Mahaweli Development and Environment- Mr. Udaya R. Seneviratne , The Director General of the Forest Conservation and others participated in the event.

3 Responses to ‘For the wrong acts of previous Govt. we are blamed for deforestation’ – President

Home » ‘For the wrong acts of previous Govt. we are blamed for deforestation’ – President