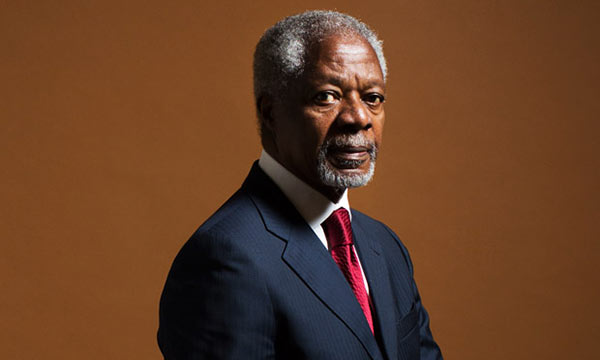 Annan, who was born in Ghana in 1938, served as the seventh UN Secretary-General, from 1997 to 2006, and was the first to rise from within the ranks of the United Nations staff.

He had been a member of The Elders, a group of global leaders working for human rights, since it was founded in 2007. In 2013, he became its chairman.

The Kofi Annan Foundation confirmed his death with “immense sadness” in a statement posted on Twitter.

Annan passed away peacefully Saturday morning after a short illness, with his wife Nane and their three children by his side during his final days, it said.

It paid tribute to Annan as a “global statesman and a deeply committed internationalist who fought throughout his life for a fairer, more peaceful world.”

The UN Migration Agency tweeted: “Today we mourn the loss of a great man, a leader, and a visionary.”

Annan was awarded the Nobel Peace Prize jointly with the United Nations in 2001 “for their work for a better organized and more peaceful world.”

Annan was descended from tribal chiefs on both sides of his family. After studying in Ghana and Macalester College in St. Paul, in the US state of Minnesota, he joined the United Nations in 1962 as a low-ranking officer with the World Health Organization in Geneva.

He thought he would stay only a few years but ended up spending almost his entire working life with the organization.