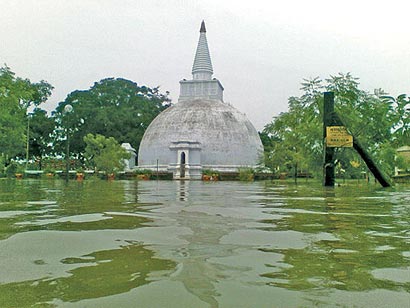 Forty two persons including two monks have been marooned due to floods in the historic Somawathiya Chaitya area, Pulasthigama police said.

Among the rest of the people marooned are 20 soldiers, 16 civil defence force personnel and six policemen. Vehicle transportation to the Somawathiya area has been stopped since Friday due to floods in the road from Sungawila to Somawathiya.

Polonnanruwa ASP Jayantha Premasiri said that the two monks were conducting religious observances at the Chaitya going there by boat. He said that the there were ample provisions for the marooned persons.

The police checkpoint and the army checkpoint in Sungawila had also been shifted due to the floods.

The ASP said that the two checkpoints would resume at the earlier location when the floods subsided.