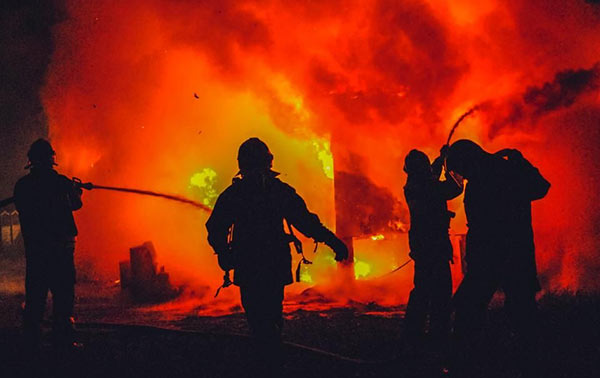 Four members of the same family of Sri Lankan heritage, including a boy and girl, have died in a house fire in south-east London.

Two women and two infants were rescued from the first floor of the property on Hamilton Road, Bexleyheath, at about 20:30 GMT on Thursday, but all four died at the scene.

Two men were taken to hospital including one who had suffered non-life-threatening leg injuries.

The cause of the fire is not being treated as suspicious, police said.

The London Fire Brigade (LFB) extinguished the fire by 21:45.

Neighbours described hearing children screaming and a “distraught” man outside the semi-detached terraced house that was “engulfed in flames”.

Builder Scott James, who lives nearby, said the family had only been in their recently renovated home for about five months.

Mr James added: “I saw them yesterday and waved at them. I spoke to them just to say hello.

“It is very sad to wake up this morning and hear they have perished.”

The LFB sent six fire engines and 40 firefighters to the scene, including crews from Bexley, Erith, Plumstead, Lee Green and Sidcup fire stations.

LFB Commissioner Andy Roe said: “This is a truly terrible incident which is both sad and shocking. Our thoughts are with the family, friends and local community at this difficult time.”

There have been no arrests and the family are receiving specialist support, according to Det Ch Supt Trevor Lawry.

“Our thoughts are with the family of the deceased, who have suffered such an awful and devastating loss,” he said.