Budget has no solutions for deepening FOREX and economic crisis – Eran 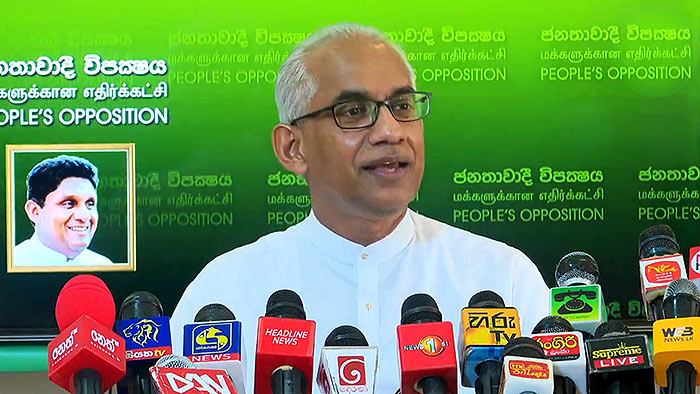 Former State minister of Finance Eran Wickramaratne says the budget – 2022 presented by the Minister of Finance Basil Rajapaksa has an unrealistic dream of 8.8% deficit as per their own estimation. However according to the Fiscal Responsibility Act of 2003 the budget deficit cannot exceed 5% of the GDP.

“As the responsible Opposition in parliament we cannot agree with the government seeking parliamentary approval for a budget proposal that violates the provisions of the Fiscal Responsibility Act of 2003,” said Opposition MP Wickramaratne speaking in the budget debate on its second reading stage.

“This is illegal. Are you asking the supreme legislature of the country, which makes these laws, to permit you to violate these laws? Do you mean to violate the law and sovereignty of the people and expect us to raise our hands in favour of this breach of law?” asked MP Wickramaratne.

Speaking further he said that, when looking at the budget it is evident that the government has presented bloated statistics and overestimations of its unrealistic dreams. This government is going in reverse. The government had estimated revenue for 2021 at 2029 billion rupees, but it has estimated receipt of only 1561 billion rupees with a shortfall of 500 billion. Today, government revenue for 2022 is projected to be 2284 billion rupees. Does that mean that the revenue will be increased by around 45 % to Rs 800 billion within a year? Increasing it by a maximum of 10% or 12% would be more realistic. This government is constantly in the habit of lying and deceiving this House and the people. So naturally, this is a daydream presented as a revenue forecast.

When we came to power in 2014, government tax revenue as a percentage of GDP was 10% and we systematically increased it to 13%; it was methodically planned and implemented. Here we remember the former Finance Minister late Mangala Samaraweera who guided plans to increase government revenue. We had a vision and a programme for the development of the country via increasing the state revenue and the budgets we presented reflected this.

Before this government came to power there was a lie that they propagated. That is, that our government taxed everything and ran on taxes. The person who concocted these so-called slogans for Gotabhaya Rajapaksa’s 2019 campaign was Basil Rajapaksa, his campaign manager.

I would like to next focus on increasing government revenue. There is an attempt to increase revenue through taxes in the budget for 2022. The budget has proposed a levy of a one-time 25% surcharge tax on companies or individuals who had a taxable income of over Rs. 2,000 million in the years 2020/2021 while increasing the VAT from 15% to 18% for the banks and the financial services. In addition to VAT there is a proposal to introduce new GST and a Social Security Tax as well. Instead of one turnover tax, there will now be multiple turnover taxes.

These taxes will burden Small and Medium Enterprises too. Shouldn’t medium-sized businesses be encouraged to expand? Is this the manufacturing economy they envisaged? This is indeed a great tragedy. The problem is not really with levying taxes. To protect social justice taxes must be levied systematically. There is no dispute about that. But there must be a consistent tax policy. In 23 years Sri Lanka amended VAT 11 times, and in contrast New Zealand in 23 years has revised it only twice. One off taxes are arbitrary and disturb private sector business plans. When those who do not know anything about managing an economy implement complicated tax structures, no investors will come to Sri Lanka. The private sector requires predictable and consistent tax policies.

He also said that under the present economic and governing context only the Rajapaksa family and their cronies have the opportunity to carry out all kinds of businesses. We are not surprised by this. Further, Wickramaratne recounted that the Mahinda Rajapaksa administration took over the airline in 2008 from Emirates Airlines investors, triggered by an incident where the presidential entourage were denied seats on a Commercial Flight. The airline had accumulated a loss of over 250 billion rupees just between 2008 and 2021. Who is bearing these costs? Innocent people who have never set a foot on a plane are the ones who are paying for this. When investors reflect on the manner in which Emirates was treated, they will have reservations about Sri Lanka’s investment climate. In this context, Port City is also a dream which we have to tread carefully.

Not every investor resorts to means like paying commissions to establish businesses. In general, investors need confidence and trust in the host country. To this end we must have a friendly foreign policy and ensure the rule of law prevails and guarantee human rights. Investors are concerned about the protection of human rights and the way the country treats local businessmen. Moreover, these values have no place in this government’s overall policies.

All wrongs will end. We urge the government not to mislead the people through racist and divisive propaganda. Our foreign policy is extremely weak, as is the state of human rights. The risk of losing the export market opportunities has re-emerged. The European GSP plus concession and the American GSP concession are very important to us. Europe, America and the Middle East in particular are the largest segments of our export market. It is through this that the country gets dollar revenue. I urge the government not to jeopardize these avenues of revenue further. When the Rajapaksa regime in 2014 cost the country the GSP plus concession, our government got it back with great difficulty. If our export market shrinks further, the economic catastrophe that will befall this country will not be insignificant.

The budget proposed that 70% of our energy requirement would be renewable energy, but there are no provisions to support the policy. The compensation promised to be paid to those who incurred losses due to organic farming is another empty promise as there are no provisions budgeted to meet this. Defense expenditures have been increased while education and health allocations have suffered. Health allocation was 255 billion and was increased to 301 billion in 2021. Despite being in a pandemic, the allocation for health in the 2022 budget is 234 billion, a drop of 67 billion from last year. 52% of the country’s population are women, and yet there has been no focus on increasing female labour force participation, allocations for maternity leave, equal pay and other issues that discriminate against women. Women issues not being represented at cabinet level is reflected in this budget.

Alarmingly but not surprisingly, about 2/3rds of the budget allocations are in the control of the members of the Rajapaksa family. Yesterday, November 16th, the whole country witnessed large scale protests.

“The application of “one country, one law” towards the government and opposition is in contrast. Our people are facing unprecedented economic hardships which may worsen in 2022. This is a blessed country. Despite the present misfortunes that the current government has heaped on us, we are ready to take up the challenge and responsibility of building this country for future generations, with the right vision, policies and a competent team,” MP Wickramaratne said.